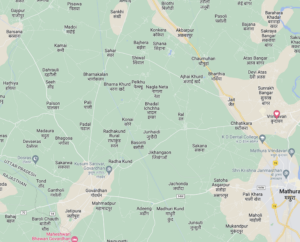 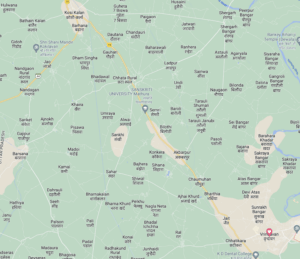 “This is where Krishna killed the demon Shankhachuda and removed the priceless jewel from his head and presented to Balarama as a gift.

Shankachuda was a follower of Kuvera, the Lord of the Yakshas and the treasurer of the demigods. Due to being puffed-up with immense wealth and false prestige, and believing that he had the right to enjoy all the beautiful women in the world, he foolishly attempted to kidnap a group of gopis who were enjoying pastimes with Krishna and Balarama at Shyama Kutira.

It was during the annual Holi festivities and the gopis had all congregated at Shyama Kutira. The atmosphere was very pleasing and the gopis were completely enraptured in listening to Krishna and Balarama sing a duet of melodious songs.

Shankhachuda suddenly appeared on the scene and after separating a number of gopis from the main group, led them away as fast as he could into the jungle. When Krishna and Balarama saw what had happened, They immediately gave chase. Seeing the two brothers close on his heels, Shankhachuda left the gopis behind and ran in fear for his life. Krishna told Balarama to take charge of the rescued gopis while He went in pursuit of the demon.

Although Shankachuda ran as fast as he could, Krishna didn’t give up the chase and finally caught up with the demon near this village. Catching hold of the demon, Krishna beat him on the head so hard with His powerful fist that the demon died on the spot.

Because Krishna killed Shankhachuda here, this village became celebrated as Sankhi. Krishna then removed the precious gem from the demon’s head and after returning to where Balarama was waiting, presented the gemstone to Balarama as a gift.

Balarama later arranged that this fabulous gemstone was presented to Radharani.

The Bhakti-ratnakara also mentions that near this village there was a very beautiful place known as Rama-kunda or Rama-talao, which is where Balarama used to spend some of His time.

This is also the place where Balarama, with the help of Madhumangala, presented the fabulous gemstone taken from Shankachuda to Radharani as a gift. It is also said that Radharani and the gopis used to visit Rama-kunda and felt great pleasure and were overwhelmed with great joy whenever they came to this beautiful place. The word ‘rama’ also means ‘pleasure’ and is another reason why the kunda achieved its name.”