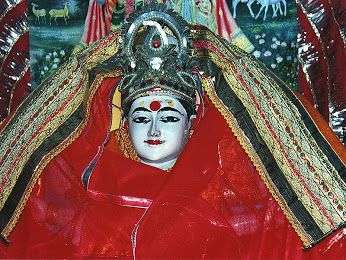 This place is situated between Nand Gaon and Barsana. The first meeting of Radhika and Shri Krishna, after Their purvaraga, took place here.

Sanket is the place where Radha and Krishna met for the first time. However somemay say, but They knew each other before. The explanation is the therm “purvaraga” that I may (try) to explain some other time.

Vrinda-devi, Vira-devi and Subala Sakha would be messengers (dutis) and arrange the meeting of Radha Krishna through signals (sanket). This is why this place is called Sanket.

In Govinda-Lilamrita and Krishna-Bhavanamirta, Shri Krishnadas Kaviraja and Shri Vishvanath Chakravarti Thakur respectively, describe Radha and Krishna’s meetings and pastimes here at midnight (naisa) and pre-dawn (nisanta). These descriptions are full of rasa.

By Yogamaya’s desire, the principal messengers, Vira-devi and Vrinda-devi, arrange the meeting of the Divine Couple Shri Radha-Krishna.

Vrinda-devi makes very sweet arrangements to awaken the Divine Couple at the end of the night, just before dawn breaks.

The male parrot and the female parrot awaken Them with enchanting words. The black cuckoo helps to wake Them up with his sweet kuhu-kuhu, and the peacock and peahen with their ke-ka. Lalita, Vishakha and the other sakhis offer arati to the Divine Couple.

When Kakkhati, the old she-monkey, calls out “Jatila”, Shri Radha and Shri Krishna become embarrassed and make Their separate ways to Their respective residences, where They fall asleep.

Delightful places worth visiting here are the temple of Sanket-bihariji, a ras-mandal and the place of a swing.

The bhajan-kuti of Shri Gopala Bhatta Gosvami stands in front of the ras-mandal, to its east.

Shri Chaitanya Mahaprabhu rested here while travelling through the twelve forests of Braj.

Just near the Ras Mandal is the temple of Sanket-devi (Shri Vira-devi); and nearby are Vihvaladevi, Vihval-kund, Ranga-mahala and Sayya Mandir. Krishnakund lies to the west of the village.
On the bank of Krishna-kund is a sitting-place of Shri Vallabhacharya. 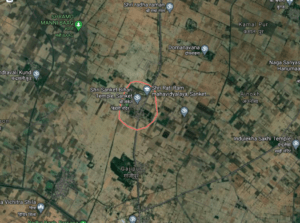 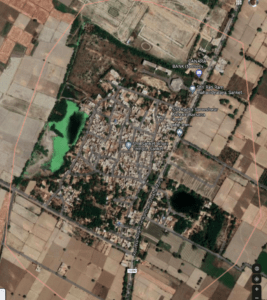 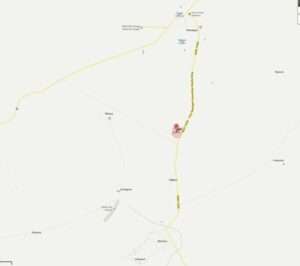 Sanket is mentioned in the Puranas to be one of the adhivanas or sub-forests of Vraja.

In the village one can visit the Sanket Devi Mandira containing the deity of Sanket Devi, an expansion of Yogamaya seen here in her form as Durga, who is also considered non-different from the gopi named Vira Devi, one of Vrinda Devi’s most important assistants who are responsible for arranging the pastimes at Sanket.

This deity of Sanket Devi was discovered here by Srila Narayana Bhatta, who re-installed the deity said to have been originally established by Vajranabha Maharaja.

There is also a rasa-mandala commemorating the rasa-lila pastimes enacted here by Radha and Krishna, and jhulana-sthali where the swing pastimes of the ‘divine lovers’ took place.

Situated near the Sanket Devi Mandira is the bhajana-kutira of Gopala Bhatta Goswami, who spent a considerable time staying at Sanket.

Some say the sitting place or baithaka of Lord Chaitanya Mahaprabhu is located here but this baithaka is not mentioned in Bhakti-ratnakara and is certainly the baithaka of Vallabhacharya, who also called himself Mahaprabhu and established many baithakas where he recited Bhagavatam which has led to this confusion.

To the south of the Sanket Devi Mandira is Krishna-kunda where many wonderful pastimes took place and also the famous banyan tree known as Sanket Vata.

To the east is Vihvala-kunda, where Krishna became overwhelmed (vihvala), when He suddenly heard the name of His beloved Radha being chanted somewhere nearby by a parrot.

It is said that this kunda was formed from the tears shed by Krishna while overcome by all the symptoms of mahabhava.

Subala had to immediately bring Radharani there in order to pacify Krishna’s intense mood of separation from Her.

Sanket is situated half-way between Varsana and Nandagrama, and was therefore the perfect place for the ‘divine lovers’ Radha and Krishna to meet secretly while unseen by others.

In fact, this is the actual place where the ‘young lovers’ first met each other at the start of Their much celebrated ‘love affair’.

Their first meeting was secretly arranged with the help of Vrinda Devi and Vira Devi, as well as Lalita-sakhi who accompanied Radharani, and Subala-sakha who accompanied Krishna.

The word ‘sanket’ means ‘to give a hint’ or ‘to give a signal’, which is the way the sakhis and sakhas used to arrange secret meetings between Radha and Krishna at this place.

In the Bhakti-ratnakara it says:
“In this Sanket-kunja the sakhis were giving hints to one-another and very carefully brought Radha and Krishna together here. At an auspicious moment, they briefly became united together for the first time at this place. Just see, there is Krishna-kunda and many other enchanting places where innumerable unseen pastimes took place”.

Sanket is especially well known because of the midnight meetings between the ‘secret lovers’ Radha and Krishna.

With the help of Their intimate assistants, especially the gopis Vrinda Devi and Vira Devi, The ‘divine lovers’ would come to Sanket Kunja and enjoy various loving pastimes and would later take rest together on a bed of flowers prepared by the gopis within the kunja.

Just before dawn, Vrinda Devi would awaken Radha and Krishna and They would secretly return to their respective homes.

During their midnight rendezvous, the ‘divine lovers’ would sometimes enjoy together on a swing, or partake of drinking honey liquor, or engage in rasa-dancing, besides many other transcendental pastimes.

Sanket-kunja is also considered to be the residence of Yogamaya Devi, who is the controlling deity and facilitator of all Krishna’s pastimes, Purnamasi Devi is her immediate expansion.

Purnamasi and Vrinda Devi meet one-another every morning and make all the arrangements for the various pastimes of Radha and Krishna, as well as their secret meetings at Sanket.

In the Bhaktivedanta purports to Chaitanya-charitamrta it says:
“Yogamaya is the name of the internal potency that makes the Lord forget Himself and become an object of love for His pure devotees in different transcendental mellows. The yogamaya potency creates a spiritual sentiment in the minds of the damsels of Vraja by which they think of Krishna as their paramour.”

From the book Vraja Mandala Parikrama

At Sanket, midway between Varsana and Nandgram, the midnight or night time pastimes between Krishna and the gopis take place.
When Krishna would go into the fields to herd the cows and  Radharani would go to pick flowers, sometimes they would meet here. It is said that in this area Radha and Krishna would be swung on a swing.

Gopala Bhatta Gosvami did bhajana here for a long time.
Many other Gosvamis did bhajana here. All of the Gosvamisi had come to this place, at least for some time, to relish the pastimes that  took place here.

There is the Sanket Devi Temple here.

In the Sanket Bihari Temple here, there are Deities of Krishna, Radharani and the gopis. Bihar means “to do pastimes.” I was told that you  can have darshan at this temple from 5 am to 12 pm and 5 to 8 pm.

How to Get Here:
Sanket is a small village between Varsana and Nandagram. From Varsana you drive about 3 1/2, km (2 1/2 miles) you then make a left hand turn and Sanket is about 300 m  from the road. You can not see the village from the road, but everyone in the area knows where it is located.

Getting Around: From the road between Nandagram and Varsana, you drive down the  dirt road and right in front of you is the Sanket Devi Temple. Directly next to the temple, to your right is Gopala Bhatta Gosvami’s bhajana kutir. If you are standing between the temple and the  bhajana kutir, Rasa Sthaii is directly in front of you, about 100 feet away, slightly to the right. To get to the Sanket Bihari Temple you make a right coming out of the Sanket Devi temple. You walk  to end of the road and go left. You then go about 50 m and the temple is on your left.

Sanket Devi is Yogamaya. Her temple is here because she arranges the meetings between Radha and Krishna. Gopala Bhatta Gosvami’s bhajana kutir is directly next to (almost touching) the  sanket Devi temple. It seems that you can have darshan of the Deity of Sanket Devi at any time during the day. Rasa Sthali, which is said to be a favorite site for rasa-lila is right next to the  temple.