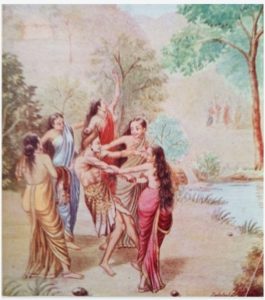 “I would like to tell you the old story about how Sanat Kumara predicted that a great king would appear in your dynasty and that he would be your son. Sanat Kumara said:

“Kasyapa will have a son, Vibhandaka, who in turn will have a son who will be called Risyasringa. The young man will be a jewel of a hermit, with all the best qualities of a renunciate, and he will observe with precision and devotion all the sternest vows of the life of a brahmacari. There will be a king named Lomapada who will commit atrocities, and because of this, his kingdom will be hit by a terrible drought. His subjects will suffer many hardships. The calamity, he will be told, would only cease if the wise young man Risyasringa came to visit his kingdom. Thus the king will be forced to send beautiful women to the hermitage, experts in the art of seduction, to convince him to come with them, to follow them to the lands of Lomapada.

“Sages generally do not like to visit crowded and noisy cities, so Lomapada saw no other solution than to lure him with deception. And when Vibhandaka is not present, the girls will seduce the unsuspecting ascetic. Thus Risyasringa will come to the kingdom of Lomapada and the drought will end. And to appease his father’s anger, Lomapada will give his daughter Shanta in marriage to Risyasringa.”

“A pious king named Dasaratha will be born in the line of Ikshvaku, who will be a great friend of Lomapada. He will have a hard time having children, but if he has that same Risyasringa perform the Asvamedha sacrifice, he will see his wish fulfilled.”

“So summon that respectable saint,” Sumantra concluded, “and be sure that thanks to his purity you will certainly get the object of your desire.”

Dasaratha was happy to hear that even before his birth Sanat Kumara had talked about him, and he was convinced that this was the way to go.

The experts began the preparations and quick messengers were sent to invite all the greatest personalities of the time. The king spared no expense, the opulence that was seen in that sacrifice was unspeakable.

This is a section of the book “The Ramayana”.