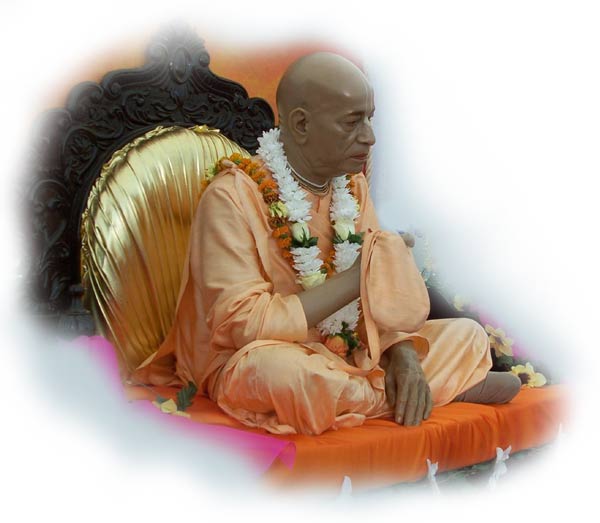 The murti of Srila #Prabhupada should be in the standard pose, that is sitting cross-legged with his hands together or with the hands apart and the right finger raised.
The murti must closely resemble Srila Prabhupada.
Keep the murti of Srila Prabhupada spotlessly clean. Pay special attention to his nostrils, in his ears, and in between his fingers and toes. The inside of the ears and nostrils can be cleaned with a moistened cotton bud (q-tip) or similar.
It is normal for resin murtis to sag over time. It commonly happens that the arms get closer to the legs. This is not something mystical and can make it more difficult to dress the murti. Sometimes it is necessary to replace resin murtis.
The murti needs repainting occasionally. Always keep the features of the murti, such as eyes, eyebrows, tilaka, lips, finger and toenails, etc. in good condition. It is helpful to keep a good quality photo of the murti, taken when the murti was properly painted as a reference for repainting. Repainting or touching up the paintwork should only be done by an experienced artist who has knowledge of the appropriate paints to be used for the murti.

As part of regular daily worship, Srila Prabhupada is offered guru-puja with full arati along with the singing of the Guru-vandana prayers written by Narottama Das Thakura. During guru-puja, devotees come forward and offer flowers or flower petals to Srila Prabhupada’s lotus feet. The flowers must be fresh, not wilted or old. Do not use wet flowers or wet petals.
It is recommended that the flowers offered at Srila Prabhupada’s lotus feet be removed after the temple morning program is completed.
Offer Srila Prabhupada a fresh flower garland or a maha-prasadam garland (in good condition) daily. This is normally done just before the start of the guru-puja. The garland is left on Srila Prabhupada until the temple is closed at night. Where possible, avoid garlands made with flowers that will stain his clothes. Do not use artificial flowers.
Srila Prabhupada’s forehead can be anointed with sandalwood paste (candana) at the beginning of guru-puja. This is more commonly done during the hot season but may be done daily as part of the regular worship. This candana may either be prasada from the deities or freshly made for Srila Prabhupada. In some cases candana may eventually cause damage to the murti.
The large resin deity is generally not removed from the vyasasana. If there is a need to remove Srila Prabhupada, this must be done with care. Occasions that Srila Prabhupada may be taken from the vyasasana are Ratha-yatra (when he rides on the cart), or when there is a public abhiseka, such as on Srila Prabhupada’s Vyasa-puja. The altar deity of Srila Prabhupada may be bathed for Vyasa-puja instead of the temple murti.
Items offered during the arati to the temple deities may also be physically offered to Srila Prabhupada on his vyasasana before being offered to any of the assembled devotees in the temple. However, this is not mandatory. This is done in the same manner the item would be offered to any other devotee, i.e. the lamp is not offered in arati style but held before Srila Prabhupada’s hands so he may respect the prasada of the Lord. Care should be taken to avoid hot ghee staining the vyasasana.