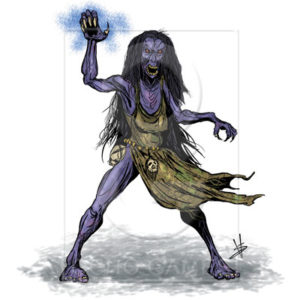 1) Origin. A malevolent being which is the very manifestation of evil. Everybody, everywhere in the world, from the very birth of this universe believed in the presence of such a wicked soul.

According to Hindu Puranas, Pisaca is a creation of Brahma. In the beginning Brahma created the eighteen prajapatis headed by Daksa, the Yaksas, the Gandharvas and the Pisacas. (Chapter 1, Adi Parva).

This wicked being is called in English a `Devil’. This word is derived from the Greek word `diabolos’. People of the West and East equally believe that Pisaca (Satan) is an enemy of men and gods alike.

2) Bible and the Pisaca. It is not clearly stated in Bible how Satan was born but it is being referred to at several places as a wicked soul which leads men to evil.

3) The Bharatiya Sankalpa. Pisaca, the creation of Brahma, has taken important roles in the Puranic stories. Though Pisaca is the instigator of all evils its manifestation appears in many contexts in the Puranas:

(i) Pisaca lives in the court of Kubera and worships him. (Sloka 16, Chapter 10, Sabha Parva).

(ii) Pisaca lives in the court of Brahma and worships him. (Sloka 49, Chapter 11, Sabha Parva).

(iv) Pisaca is the head of all evil spirits. Marici and sages like him have created many evil spirits. (Sloka 46, Chapter 272, Vana Parva).

(vii) In the battle of Bharata, the horses attached to the chariot of Alambusa were Pisacas. (Sloka 38, Chapter 167, Drona Parva).

(x) The Pisacas were present during the fight of Arjuna with Karna (Sloka 50, Chapter 87, Karna Parva) .

(xi) The Pisacas worship Parvati and Paramesvara doing penance on the top of the mountain Munjavan. (Sloka 5, Chapter 8, Asvamedhika Parva).

(xii) During the time of Mahabharata many Pisacas incarnated as kings. (Sloka 6, Chapter 31, Asramvasika Parva).

If one has any desire to go to the moon, the sun or any other planet, one can attain the desired destination by following speciﬁc Vedic principles recommended for that purpose, such as the process technically known as Darsa-paurnamasa.

These are vividly described in the fruitive activities portion of the Vedas, which recommends a speciﬁc worship of demigods situated on different heavenly planets. Similarly, one can attain the Pita planets by performing a speciﬁc yajna.

Similarly, one can go to many ghostly planets and become a Yaksa, Raksa or Pisaca. Pisaca worship is called “black arts” or “black magic.” There are many men who practice this black art, and they think that it is spiritualism, but such activities are completely materialistic. Similarly, a pure devotee, who worships the Supreme Personality of Godhead only, achieves the planets of Vaikuntha and Krsnaloka without a doubt. It is very easy to understand through this important verse that if by simply worshiping the demigods one can achieve the heavenly planets, or by worshiping the Pitas achieve the Pita planets, or by practicing the black arts achieve the ghostly planets, why can the pure devotee not achieve the planet of Krsna or Visnu? Unfortunately many people have no information of these sublime planets where Krsna and Visnu live, and because they do not know of them they fall down. Even the impersonalists fall down from the brahma-jyotir. The Krsna consciousness movement is therefore distributing sublime information to the entire human society to the effect that by simply chanting the Hare Krsna mantra one can become perfect in this life and go back home, back to Godhead.