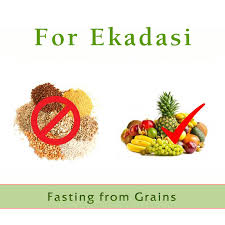 Sri Yudhishthira Maharaja asked of Lord Sri Krishna, “What is the name of that Ekadasi that occurs during the light fortnight (shukla paksha) of the month of Bhadrapada (August-September “Hrishikesha mase”)? Who is the worshippable Deity for this Ekadasi, and what merit does one attain in observing it? Kindly reveal all of this to me my Lord.”

The Supreme Personality of Godhead Lord Sri Krishna addressed His devoted Yudhishthira as follows, “This Ekadasi, Oh Yudhishthira, is called Vamana Ekadasi, and it bestows upon those who observe it both great merit and ultimate liberation from material bondage. Therefore, because it removes all one’s sinful reactions, it is also called Jayanti Ekadasi. Just hearing of its glories frees one from all his past misdeeds. So auspicious is this fast that observing it bestows the same merit as that earned by performing a horse sacrifice. There is no better Ekadasi than this, because it awards liberation so easily. Thus if one truly desires freedom from the punishing material world, one should fast on Vamana Ekadasi.

“While observing this holy fast, a Vaishnava should lovingly worship the Supreme Lord in His form as Vamanadev, the dwarf incarnation, whose eyes are like lotus petals. By doing so, he worships all other Deities as well, including Brahma, Vishnu, and Shiva, and at death he undoubtedly goes to that abode of Sri Hari. In all the three worlds there is no fast that is more important to observe. The reason this Ekadasi is so auspicious is that it celebrates the day when the sleeping Lord Vishnu turns over on His other side; thus it is also known as Parivartinii Ekadasi.”

Maharaja Yudhishthira then asked of the Lord, “Oh Janardana, please clear up a question I have. How is it that the Supreme Lord sleeps and then turns over on His side? Oh Lord, when You are asleep what happens to all the other living entities? Please also tell me how You bound the king of the demons, Bali Daityaraj (Bali Maharaja), as well as how one may please the brahmanas. How does one observe Chaturmasya, which You mention in the Chaturmasya-mahatmya of the Bhavishya Purana? Kindly be merciful to me and answer these questions.”

The Supreme Personality of Godhead Sri Krishna replied, “Oh Yudhishthira, lion among Kings, I will gladly narrate to you an historical event that, simply by hearing, eradicates all one’s sinful reactions.

“In the Treta-yuga there once was a king of the name Bali. Though born in a family dynasty of demons (daityas), he was very devoted to Me. He sang many Vedic hymns to Me and performed the homa rituals (fire sacrifices) just to satisfy Me. He respected the twice-born brahmins and engaged them in performing sacrifices daily. This great soul had a quarrel with Indra, however, and eventually defeated him in battle. Bali took over his entire celestial kingdom, which I Myself had given to Indra. Therefore Indra and all the other devas (demigods), along with many great sages, approached Me and complained about Bali Maharaja. Bowing their heads to the ground and offering many sacred prayers from the Vedas, they worshipped Me along with their spiritual master, Brihaspati. Thus I agreed to appear on their behalf as a dwarf Vamanadeva, My fifth incarnation.”

King Yudhishthira further enquired, “Oh Lord, how was it possible for You to conquer such a powerful demon, and only by coming in the form of a dwarf brahmin? Please explain this clearly, for I am Your faithful devotee.”

“The Supreme Lord, Sri Krishna replied, “Though a dwarf, I was a brahmana, and I approached that pious king Bali to ask him for alms in the form of land. I said, ‘Oh Daityraj Bali, please give Me just three steps of land in charity. Such a small piece of land will be good as all the three worlds for Me.’ Bali agreed to grant My request without lengthy consideration. But as soon as he vowed to give Me the land, My body began to expand into a gigantic transcendental form. I covered the entire Earth with My feet, all the Bhuvarloka with My thighs, the Swarga heavens with My waist, Maharloka with My stomach, Janaloka with My chest, Tapoloka with My neck, and Satyaloka with My head and face. I covered the entire material creation. Indeed, all the planets of the universe, including the Sun and the Moon, were encompassed by My gigantic form.”

“Seeing this astonishing pastime of Mine, all the demigods, including Indra and Shesha, the king of the snakes, began to sing Vedic hymns and offer prayers to Me. Then I took Bali by the hand and said to him, ‘Oh sinless one, I have covered the whole Earth with one step and all the heavenly planets with the second. Now where shall I place My foot to measure the third step of land you promised Me?’

“Upon hearing this, Bali Maharaja bowed down in humility and offered Me his head to place My third step. Oh Yudhishthira, I placed My foot on his head and sent him all the way to Patalaloka. Seeing him thus humbled, I became very pleased and told Bali that henceforth I would permanently reside in his palace. Thereafter, on Parivartinii Ekadasi, which occurs during the light part of the month of Bhadra (August-September), Bali, the son of Virochana, grandson of Prahlad, installed a Deity form of Me in his residence.

“Oh king, until Haribodhinii Ekadasi, which occurs during the light part of the month of Karttika , I continue to sleep in the ocean of milk. The merit one accumulates during this period is particularly powerful. One should therefore observe Parivartinii Ekadasi carefully. Indeed, it is especially purifying and thus cleanses one of all sinful reactions.

On this day the faithful devotee should worship Lord Trivikrama, Vamanadeva, who is the supreme father, because on this day I turn over to sleep on My other side.

“If possible, on this day one should give a qualified person some yogurt mixed with rice, as well as some silver, and then remain awake throughout the night. This simple observance will free one of all material conditioning. One who observes this sacred Parivartinii Ekadasi in the way I have described will surely attain all kinds of happiness in this world and the kingdom of God in the hereafter. One who simply hears this narration with devotion will go to the abode of the demigods and shine there like the Moon itself, so powerful is observance of this Ekadasi. Indeed, this observance is as powerful as the performance of a thousand horse sacrifices.”

Thus ends the narration of the glories of Parivartinii Ekadasi, or Vamana Ekadasi, which occurs during the light part of the month of Bhadrapada, from the Brahma-vaivarta Purana. These stories have been summarised and slightly changed or abbreviated from how they are found in the celebrated book, “Ekadasi: The Day of Lord Hari” 1986. HH Krishna Balaram Swami. BhaktivedantaInstitute Press, Pages 117-119.