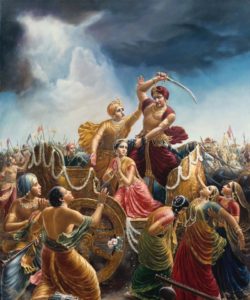 As the newly married Vasudev and Devaki prepared to start for home, conch shells, bugals, drums, and kettle drums all vibrated in concert for their auspicious departure. But as Kamsa controlling the reigns of the horses, drove the chariot along the way, an unembodied voice addressed him, “You foolish rascal, the eighth child of the woman you are carrying will kill you!”
Kamsa was a condemned personality in the Bhoja dynasty because he was envious and sinful. Therefore, upon hearing this omen from the sky, he caught hold of his cousin’s hair with his left hand and took up his sword with his right hand to sever her head from her body.
Wanting to pacify Kamsa, who was so cruel and envious that he was shamelessly ready to kill even his own cousin, the great soul Vasudev spoke to him in the following words: “My dear Kamsa, you are the pride of your family, the Bhoja dynasty, and great heroes praise your qualities. How could such a qualified person as you kill a woman, your own cousin, especially on the occasion of her marriage? O great hero, one who takes birth is sure to die, for death is born with the body. One may die today or after hundreds of years, but death is sure for every living entity.”
When Vasudev saw that Kamsa was determined to kill his cousin Devaki, he thought to himself very deeply. Considering the imminent danger of death, he thought of another plan to stop Kamsa. “By delivering all my sons to Kamsa,” Vasudev thought, “I shall save the life of Devaki. Perhaps Kamsa will die before my sons take birth, or, since he is already destined to die at the hands of my son, one of my sons may kill him. For the time being, let me promise to hand over my son’s so that Kamsa will give up this immediate threat, and if in due course of time, Kamsa dies, I shall have nothing to fear.”
After thus considering the matter as far as his knowledge would allow, Vasudev submitted his proposal to the sinful Kamsa with great respect. Kamsa agreed to the logical arguments of Vasudev, and having full faith in Vasudev’s words, he refrained from killing his cousin. Vasudev, being pleased with Kamsa, pacified him further and went home