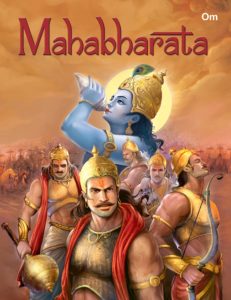 One day, a small group of people arrived in Kamyaka. He was Krishna, accompanied by Dhristadyumna, Dhrishtaketu and the Kekaya brothers, all world famous for their prowess in warfare. They had come to visit the Pandavas to find out how they lived in the forest and to talk about the Kuravas.

“If you want,” Krishna said to Yudhisthira, “I can immediately march with my army to Hastinapura and destroy your enemies. The world needs righteous rulers, not asuras like Duryodhana and his companions, which are worthy of him.”

“No, Krishna,” the Pandava retorted. “The ruler must always be pious, and it is important never deviate from the path of virtue, which our wicked relative does all the time. Now I have a debt to him that will end in thirteen years. After that time has passed, we will finally be able to make him pay as he deserves. But only then.”

Yet, despite the wise words uttered by Yudhisthira, everyone felt in favor of an immediate war; Krishna himself was infuriated with the Kuravas, and his anger, which contrasted with the transcendental beauty of his face, inspired even more fear. So, he said:

“I swear it will not be many days after the expiration of the next thirteen years without the earth being able to drink the blood of Dhritarastra’s sons and of all those who have supported them.”

That day even Draupadi, in the presence of Krishna and his brother Dhristadyumna, could no longer contain the pain, giving free rein to all bitterness. Krishna comforted her with kind words.

“Dear queen, all this would not have happened if I had come to Jayanta. Unfortunately, I was engaged in a hard fight against Shalva and for this reason I could not intervene. But you must not worry too much, chaste lady, because soon this exile will end and Duryodhana, who is currently enjoying the results of his ungodly activities, will soon pay the price for his misdeeds.”

Krishna then paused to tell the story of the battle in which he was the adversary of the powerful demon Shalva.

The next day the visitors left, leaving the Pandavas full of renewed courage.

Following the visit of the Vrishni, the Pandavas decided to leave Kamyaka and move to Dvaitavana, a beautiful forest that Arjuna had visited during his previous pilgrimage.

As soon as they arrived, Yudhisthira went to pay homage to the Rishis who lived in that place and received greetings full of deep affection from all. The son of Dharma was very fond of the particular atmosphere of that forest, the peace, the serenity, the natural and unspoiled scenery, the practices of yoga and meditation, and above all, the company of those who had given up worldly pleasures to obtain liberation and the return to the original spiritual universe.

In an idyllic corner of Dvaitavana, the brothers built simple huts that would be their homes for some time. In that place Yudhisthira was able to regain the peace of mind that he believed was lost.

One day, one of the most illustrious Rishis of the time came to visit them, Markandeya, who for his advanced age had witnessed the events of many yugas, and yet thanks to his mystical powers and the blessings of Shiva he had kept his body young and fresh, like that of a boy.

Markandeya stayed with them for several weeks and told wonderful stories, including that of Prince Nala. Then, with a promise to return soon, he left.

We have already mentioned that Yudhisthira loved the life of the forest, as he had the soul of an ascetic, a contemplative, a philosopher; he enjoyed long discussions with the Rishis and spiritual disciplines. But the same could not be said of the other brothers nor of Draupadi. Above all, Bhima had not at all let go of the terrible fury of Jayanta’s time; so, he continued with tremendous determination to train, and often he could be heard cursing and threatening Duryodhana and his brothers. Yudhisthira was happy, but the other five were not at all. They lived in anticipation of revenge.

One evening, unable to contain themselves anymore, Bhima and Draupadi let off steam.

“You are not a true Kshatriya,” they said, “you are a Brahmana born in the wrong family. But we, who belong to the warrior race cannot enjoy this life as you do; we want to act, avenge the wrongs we have suffered, we want to kill the wicked who humiliated us. All this happened because of you, because of your attachment to gambling, for not being able to resist the temptation of gambling. “

“No, you are wrong,” he replied. “My intention is not at all to enjoy this peaceful situation, but being a Kshatriya by birth, my propensity is all towards the observance of my natural duties. We have the duty to protect the people with a government that reflects the laws of the Supreme Lord. And it is these very laws that do not allow us to break our promises. Even though we have been deceived, we have lost in the game and we promised that we would spend twelve years in the forests and the thirteenth in disguise. Time will pass in a flash and will put an end to this exile; then, we will act as befits the Kshatriyas. We will meet the Kuravas on the battlefield and will exterminate them from the first to the last.”

The tone of his voice was so bright and heartfelt that the others were reassured.