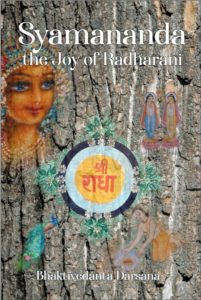 …
However at the same time seeds of doubt also started sprouting.
Some Vaisnavas from Gauda Mandala had come to Vraja for darsana, and after returning they misinformed Hridaya Caitanya Thakura that Duhkhi Krishna Dasa had given him up as Guru, given up the name given by him, and had adopted a new name, Syamananda, and has now painted on his forehead a new tilak known as syamanandi. Hearing such bad news about his very dear disciple, Hridaya Caitanya Thakura felt deeply hurt. He thought that by deserting his original Gurudeva, Duhkhi Krishna Dasa had acted against the scriptures and tainted the dignity of his Vaisnava lineage for which he would have to suffer in hell. Thinking about this, he became disturbed and left Gauda Mandala accompanied by the sixty-four Mahantas, twelve Gopalas and other distinguished Vaisnavas.
After reaching the Dhira Samira area of Sri Vrindavana , he called for a large meeting of Vaisnavas at Kalpa Kunja to decide which action should be taken against Duhkhi Krishna Dasa.
At the beginning of the meeting, Hridaya Caitanya Prabhu asked Duhkhi Krishna Dasa:
“Why did you give up your original Guru and adopt a new name and tilak?”
With all humility and with folded hands, Syamananda replied:
“It is only by my Gurudeva’s mercy that I received the name Syamananda and a new tilak. These are now indelible. If I wash them off, they reappear.”
Hearing this Sri Hridaya Caitanya was very displeased and angry.
“I never gave you another name nor authorized a new tilaka. It seems that you are claiming that these things are of divine origin. Very well. Then in the presence of all wash them off and let’s see if they will again appear on your body. If this will happen, then I would accept that these were indeed obtained by my mercy. Otherwise you will be excommunicated from the Vaisnava community for misbehaving and speaking lies.”
Then Hridaya Caitanya Prabhu washed the new tilak adorning the forehead of his disciple and the name Syamananda written on his chest, rubbing them off with his hands. Then Syamananda Prabhu asked the Vaisnavas to give him forty-eight minutes and started chanting the Radha mantra.
As soon as he chanted the mantra, he assumed his Manjari form and, accompanied by Lalita Sakhi, reached Srimati Radharani’s lotus feet in the eternal abode. He (in a feminine form) said:
“My guru doesn’t believe that my tilaka and name are of divine origin. If you don’t help me, he will excommunicate me.”
Under the direction of Srimati Radharani, her cousin Subala, who also happened to be a close friend of Krishna, assured Syamananda of protection.
Back in the assembly at Dhira Samira in Vrindavana, by the unlimited mercy of Srimati Radharani and in the presence of all Vaisnavas, the name Syamananda on his chest and the tilak on his forehead reappeared, even brighter than before. Seeing this miracle, the sixty-four Mahantas, twelve Gopalas and all other Vaisnavas present filled the sky exclaiming,
“Jaya Radhe Radhe!”
Being definitely proved before everyone’s eyes that Syamananda received such mercy directly from Srimati Radharani, all the present Vaisnavas started praising him.
After this incident Hridaya Caitanya went to circumambulate Vraja Mandala accompanied by all the Vaisnavas who came from Gauda Mandala with him, and Syamananda Prabhu followed them.
After having darsana of the twelve forests they reached Sanketa Kunja , where the sweet Rasa Lila of Radha Krishna was being performed. Seeing that uncommon presentation of the rasa dance, Syamananda Prabhu became surcharged with the mood of the gopis and started dancing sweetly like a gopi, touching the end of his cloth on his forehead and shaking his waist. Seeing his dance, Hridaya Caitanya Prabhu thought that Syamananda had abandoned the worship of Lord Krishna in the mode of friendship and adopted Srimati Radharani’s mode of a girlfriend . Being a worshipper in the mode of friendship, Hridaya Caitanya Prabhu became angry and repeatedly ordered Syamananda Prabhu to stop dancing, but when he refused to give up the gopi mode, his Gurudeva hit his back with a stick three times.

This is a section of the book “Syamananda, the Joy  of Radharani”.
To buy the complete book, click above