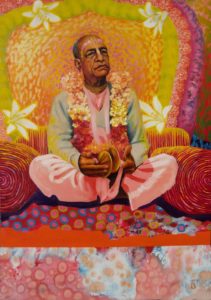 But because it is very simple, sometimes those who think themselves as very intelligent and advanced, they think,

“Oh, what they are doing, Hare Krsna, Hare Krsna? We are meditating, we are philosophizing, and we are doing penance and austerities and following the rituals, so many things.”

So practically, they are, according to Bhagavad-gita they are not directly in touch with the Supreme Lord, but they have taken different paths as ahangrahopasanam, thinking himself as one with the Lord, pantheism, thinking everything the symbol of God, and thinking the universal form as the Supreme, in different ways.

So anyway, all of them, the first-class mahatma and all these people, they are transcendentalists. They are trying to realize the Absolute Truth. Maybe in different grades, but they are trying.

And besides that, besides them, there is another class who are, more or less can be called, not transcendentalists but materialists. And who are they? That is described here.

This is a section of the book “Brilliant as the Sun”.

To buy the complete book,click above