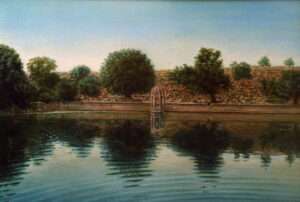 Krishna as a 7 year old boy persuaded His father Nanda Maharaj and other cowherd men to stop worshipping Indra, the demigod of rains, and instead worship the supremely compassionate Govardhan Hill for providing all the things necessary for the cows.

When Indra saw that the Vrajavasis had stopped worshipping him and were worshipping Govardhana instead, he became angry. Consequently, with the intention of destroying them, he poured forth torrential rains and hurled thunderbolts upon them for seven days, but he was not successful.

Finally, Lord Brahma advised him to ask for forgiveness for his offence, and so Indra performed abhisheka of Sri Krishna with the milk of Surabhi, the celestial cow, at this place.

Sri Krishna was named “Govinda” because He nourishes and gives pleasure to all — the cows, the gopas, the gopis and to the land of Vraja.

This place is known as Govinda Kunda because the name-giving ceremony and abhisheka of Sri Govinda were performed here.

Sri Vajranabha, the great grandson of Krishna, established this kunda in memory of this pastime.

Various scriptures state the significance and importance of Govinda Kunda.