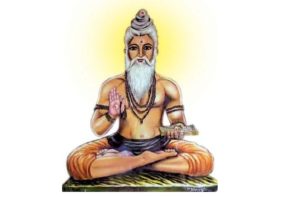 2) Birth. Brhaspati once approached, on the crest of a wave of lust, Mamata, his brother’s wife who was pregnant then. The child from the mother’s womb said `no’ to the move. But, Brhaspati cursed the child and had his own way with Mamata. Thus two children developed in her womb.

Just after delivering the children the mother went away leaving the child by Brhaspati behind. The Devas took charge of the forsaken child and roamed him Bharadvaja. Ultimately they handed over the child (Bharadvaja) to king Bharata, the famous son of Dusyanta. Children had already been born to Bharata by his three wives, but as all of them were found to be immoral the mothers themselves killed them. It was at such a juncture that Bharata got Bharadvaja as adopted son. (Bharadvaja is known by another name also, Vitatha). From Vitatha was born Manyu, from Manyu Brhatksetra from Brhatksetra Jaya and from Jaya Garga. The famous Rantideva was the grandson of Nara, (the brother of Garga) and son of Sarixkrti. A son called Sani was born to Garga after which he took to Sannyasa.

3) Yadavaguru. In course of time Garga became preceptor of the Yadavas. Sri Krsna and Balabhadrarama who had returned to Mathura from Ambadi were sent to sage Sandipani in obedience to the advice of Garga.

4) Garga and Mucukunda. Garga once visited Mucukunda, son of Mandhata at his palace, and very much pleased with the devoted reception accorded to him blessed Mucukunda that one day he would see Sri Krsna in person. It was according to this blessing that Mucukunda, while asleep once in a cave had a sight of Krsna.

5) Importance of Garga. A number of reputed sage visited Sri Rama on his return to Ayodhya from the forest. Amongst them were present Kausika, Yavakrita, Raibhya, Kanva and Garga with their numerous disciples.

6) Garga, a scholar in astronomy. There is a place called Gargasrota on the banks of river Sarasvati. Garga did tapas here and discovered some principles of astronomy such as the path of planets, stars etc. He was also the chief astronomer in the assembly of emperor Prthu.

(1) While the great war was raging Garga visited Kuruksetra and advised Drona to end the war.

(2) He advised king Visvavasu about eternity.

(3) He spoke about the greatness of the world ( Visvamahima) to Yudhisthira.