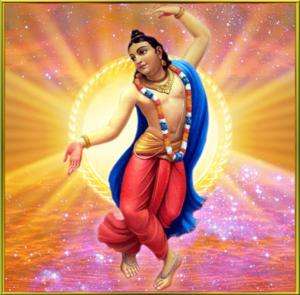 “Of all internal potencies Gadadhara Pandita is the greatest, which means he is the form of Radha.”[1]

“Gadadhara Panḍita, the fourth branch, is described as an incarnation of the pleasure potency of Sri Krishna. No one, therefore, can equal him.”

“Sri Krishna’s pleasure potency, formerly known as Vrindavanesvari, is now personified in the form of Sri Gadadhara Panḍita in the pastimes of Lord Caitanya Mahaprabhu. Sri Svarupa Damodara Gosvami has pointed out that in the shape of Laksmi, the pleasure potency of Krishna, she was formerly very dear to the Lord as Syamasundara-vallabha. The same Syamasundara-vallabha is now present in Lord Caitanya’s pastimes as Gadadhara Panḍita. Formerly, as Lalita-sakhi, she was always devoted to Srimati Radharani. Thus Gadadhara Panḍita is simultaneously an incarnation of Srimati Radharani and Lalita-sakhi.”

In the twelfth chapter of this part of the Caitanya-caritamrta there is a description of the descendants or disciplic succession of Gadadhara Panḍita.”

Radharani is bossy in Her nature and controls Krishna. She is on the left side of Krishna, she is a lefty type of Gopi. But Radha becomes submissive, and not bossy, in the form of Gadadhara.

So, how does that actually happen?

When Krishna wants to experience the love of Radharani for Krishna, Krishna plunders that love. So Radha feels “I have no love for Krishna”. Enriched with that love He takes a physical golden form. He becomes kancani, Sri Caitanya Mahaprabhu.

Krishna had two main wives: Rukmini and Satyabhama. The latter always quarreled with Krishna while Rukmini never did, she was submissive. Gadadhara Pandita’s love for Sri Caitanya Mahaprabhu was much similar to Rukmini devi’s love for Krishna.

But Mahaprabhu sometimes desired to see Gadadhara upset with Him[2].

“Lord Sri Caitanya Mahaprabhu sometimes desired to see Gadadhara Panḍita’s affectionate anger, but because of his knowledge of the Lord’s opulences, his anger was never invoked.”

Joking with Rukmini devi in Dvaraka, Krishna once advised her to accept another husband because He was not fit for her. Rukmini Devi, however, unable to understand His joking words, took them very seriously and immediately fell to the ground in fear of separation from Him. In the pastimes of Lord Sri Caitanya Mahaprabhu, Jagadananda Panḍita was always in disagreement with the Lord like Satyabhama, whereas Gadadhara Panḍita was always awed by the Lord’s opulence and was therefore submissive to the Lord under all circumstances.

This is an example of the great variety of love present in the spiritual world.

This is a section of the book “On a Silver Platter”.