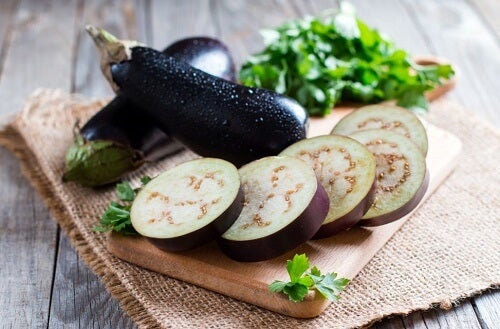 Cut eggplants into small chunks. If your fry-pot is small, figure 2 to 3 times as much eggplant as it appears it will hold (as eggplant cooks down, you can add more and more). Make a chaunce with lots of cumin seeds, medium reds, and medium hing, and plenty of ghee. When chaunce ready, add eggplant bits and stir. Add plenty of turmeric, medium salt (not too much, eggplant is sensitive to salt), and medium black pepper. Have on high heat. Let sit for a while until brown and just beginning to stick – then stir, scraping bottom of pan. Then let sit again, and keep repeating this process. If not cooking very quickly or thoroughly, add more butter or ghee – this preparation requires plenty. When eggplant chunks are soft through and beginning to mush up, add tomatoes chopped into six or 8 pieces. (If tomato skins have first been removed by scaling the tomatoes quickly in boiling water or turning directly in gas flame, this is nicer – no rolled-up skins later). Figure 2 medium size tomatoes to one medium sized eggplant. Stir these in, and also, optional, add a bunch of chopped-up spinach (tough stems excluded) at the same time. Water will come out of the tomatoes, and the whole thing will become soupy. Now start boiling out of the water, letting sit, then stirring. As water cooks out it begins to thicken. Watch out you don’t burn at this stage. Then, when all loose water is gone and the whole thing is an un-recognizable, almost dry, pasty substance, finished. Options are to (1) put in slices of zucchini squash (corgetttes) with the tomatoes (2) to mix in boiled potato-chunks at the end (3) to thoroughly cook chickpeas and then deep fry them in very hot ghee until a bit crisp on the outside but still soft inside, and then mix in at the end. But plain eggplant and tomatoes, or with spinach, is sufficient in itself. This makes a nice noon meal along side kittrie and cuddy and chapatis. It is a very big hit at feasts, especially with devotees and devotee-types. You can often recognize a potential devotee by the way he goes after this preparation. Flat karmies don’t always care much for it. At one time Srila Prabhupada was eating this every day.