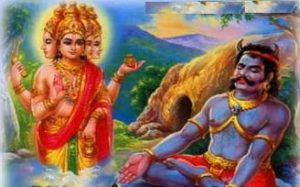 Long ago there was a wicked demon King- Mahishasura.

He wanted to be powerful and rule the three worlds. Therefore, he performed severe penance to please Lord Brahma. When Lord Brahma was pleased and appeared before him, Mahishasura asked a boon – to be immortal – that is to never die. But Lord Brahma said:

“Mahisha, all that is born must die. That is the universal law. You cannot escape that”.

Mahishasura thought for a while and said

Lord Brahma agreed and granted him the boon and returned to his abode.

How can a woman kill a man? That is impossible. I am now the most powerful person in the whole universe.

Mahishaura immediately ordered his army to attack the humans on the earth and the Gods Devas in the Devaloka. Mahishasuar and his men became a menace, they started bullying and destroying the Devaloka and no one could touch him. The King of Devas, Indra went to the Trimurtis, Brahma, Vishnu and Siva and explained the situation to them.

The three Gods created a powerful woman with several hands. Lord Shiva offered his trisula to Her. Maha Vishnu his Sudarsana chakra Lord Indra his Vajrayudha, or thunderbolt. They named her Durga.

Durga, now, a powerful Goddess armed with inner strength, courage and wisdom with arms gifted by the powerful Devas set out on a lion to destroy Mahishasura. Mahishasura’s heart skipped a beat when her heard the thunder of Goddess Durga’s arrival. Still, he asked

“A mere female trying to attack me?”

“I not an ordinary female, Mahisha. I am here to fulfil your desire to be killed by a woman”

He immediately realised it was a danger sign for him and changed himself into a buffalo and charged the Goddess with all his might. Durga with her inborn power and acquired weapons killed Mahishasura after a long battle.

The day Goddess Durga killed the wicked demon Mahishasura is celebrated as Vijayadasami . This day is also celebrated as a victory of Good over Evil.