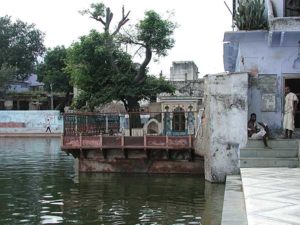 While staying in Gopiballabhpur, one day Syamananda Prabhu asked Rasikananda Prabhu to sit in front of him and said to him with affection,
“Dear Rasika, please give me one thing in charity.”
Rasikananda shyly replied with folded hands,
“I have already surrendered my body, mind and life at your lotus feet. What else do I have which may be given to you? Nevertheless, just command me and I will carry out your order as if it were an injuction of the Vedas.”

Hearing this, Syamananda Prabhu said:
“Please distribute the Sri Hari Nama Maha-mantra to everyone in Utkal, from the brahmanas up to the chandalas, to men and women, kings and paupers, old persons, brahmacharis, grhasthas, vanaprasthas and sannyasis without any discrimination.”
The instructions of Syamananda are perfectly in line with all the sastras, which give utmost importance to the chanting of the Hare Krishna Mantra. Srimad-Bhagavatam (1.6.34) says:
etad dhy ātura-cittānāṁ
mātrā-sparśecchayā muhuḥ
bhava-sindhu-plavo dṛṣṭo
hari-caryānuvarṇanam
Translation
It is personally experienced by me that those who are always full of cares and anxieties due to desiring contact of the senses with their objects can cross the ocean of nescience on a most suitable boat — the constant chanting of the transcendental activities of the Personality of Godhead.

The purport of Srila Prabhupada to this verse is enlighening:
“The symptom of a living being is that he cannot remain silent even for some time. He must be doing something, thinking of something or talking about something. Generally the materialistic men think about and discuss subjects which satisfy their senses. But as these things are exercised under the influence of the external, illusory energy, such sensual activities do not actually give them any satisfaction. On the contrary, they become full of cares and anxieties. This is called māyā, or what is not. That which cannot give them satisfaction is accepted as an object for satisfaction. So Nārada Muni, by his personal experience, says that satisfaction for such frustrated beings engaged in sense gratification is to chant always the activities of the Lord. The point is that the subject matter only should be changed. No one can check the thinking activities of a living being, nor the feeling, willing or working processes. But if one wants actual happiness, one must change the subject matter only. Instead of talking of the politics of a dying man, one might discuss the politics administered by the Lord Himself. Instead of relishing activities of the cinema artists, one can turn his attention to the activities of the Lord with His eternal associates like the gopīs and Lakṣmīs. The almighty Personality of Godhead, by His causeless mercy, descends to the earth and manifests activities almost on the level of the worldly men, but at the same time extraordinarily, because He is almighty. He does so for the benefit of all conditioned souls so that they can turn their attention to transcendence. By doing so, the conditioned soul will gradually be promoted to the transcendental position and easily cross the ocean of nescience, the source of all miseries. This is stated from personal experience by such an authority as Śrī Nārada Muni. And we can have the same experience also if we begin to follow in the footsteps of the great sage, the dearmost devotee of the Lord.”

Rasikananda Prabhu committed to execute his Gurudeva’s order, who placed his hand on his head and mercifully imparted complete power unto him.

After that Syamananda went to Chakulia and also ordered Damodara Misra to distribute Sri Hari Nama in every house in Utkal.

This is a section of the book “Syamananda, the Joy of Radharani (English)”.