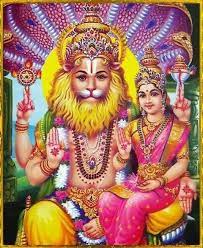 One time Durvasa Muni got enraged because Samudra (Varuna) did not invite him to a sacrifice. As a result he and his wife were cursed to take birth in the low tribal class named Chenchu.

The demon Hiranyakasipu had become so powerful that he could control the whole universe and was looking for kidnaping Laksmi. To protect His companion, He transformed her glow in a fruit and planted it in a tree.

During this time Varuna and his wife had taken birth as Chenchus but they were sad because had no children. So Narada Muni gave them the Laksmi-fruit and Laksmi was born as Chenchita.
When Narasimha killed Hiranyakasipu nobody, not even Laksmi Devi, could approach Him. But Narasimha knew that the innocent Chenchu girl was not afraid of Him. So His fury abated and the couple fell in love. Laksmi Devi was not happy about that and got angry. Narada told her that Chenchita was Her own glow and non-different from Her. So Chenchita returned into the original Laksmi and from that day was know Her as Chenchu Laksmi, the companion of Lord Narasimha Deva.
Varuna and his wife were also relieved from the curse.

In the altars where Narasimha is present, Prahlada Maharaja must be there and also Srimati Chenchu Lakshmi. She is seated in padmasana on the Lord’s left side.

This story is found in the Sthala Purana.