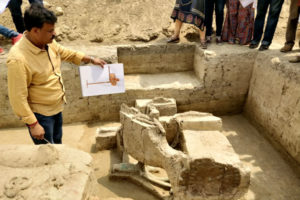 Lately I was asked if there was any archaeological evidence of Kuruksetra’s battle. After all, millions of people died, there were horses, elephants, war chariots, weapons and all. Even though more than 5,000 years have passed, something should have remained under the earth.

We have plenty of archeological evidences on Kuruksetra battle and other historical topics, but the problem is that none of us spend time researching.
If we did we’d discover that we have physical evidences proving that the Puranas and the Itihasas are history books.

In the past I dedicated some time to this field of science, although certainly not enough, and I wrote a booklet of only 67 pages in italian entitled “L’Invasione degli Aryani in India”. This is a book of history, archeology and chronology, proving that the Aryan invasion of India never happened.

Some of the numerous archeological findings are telling us that:

1. There was never any invasion from any Aryans.

2. The city of Dvaraka actually existed. I have a big book entitled “The Lost City of Dvaraka” by professor S.R. Rao that proves it beyond any doubt.

3. The river Sarasvati existed in its exact course as described in the Vedas and Puranas, as proved by satellites.

4. The bridge from Ramesvaram to Lanka is an historical fact.

But let’s see what we have so far on Kuruksetra.

This is what I have in my Archive (in an unprocessed and messy form):

An excavations in 1952, revealed the existence of vidurka–tilla (Vidura’s palace), Draupadi–ki–rasoi (Draupadi’s Kitchen) and Draupadi Ghat, along with copper utensils, iron seals, ornaments made of gold and silver, terracotta discs and several oblong shaped ivory dice used in the game of chauper (ancient game in which Duryodhana, with help of his maternal uncle Sakuni, defeated Yudhistira and sent his brothers along with Draupadi to forest exile for 13 years).

In archaeological excavations around Hastinapur, about 135 iron objects which included arrow and spearheads, shafts, tongs, hooks, axes, and knives were found, which indicate the existence of a vigorous iron industry.

There are indications of brick–lined roads and drainage systems, and an agro–livestock based economy. The painted grey ware (PGW) of Hastinapura has been assigned to 2800 BCE and beyond.

The Lakshagriha Excavation Project of the Archaeological Survey of India (ASI) is located in Barnava (Varanavat in the epic) village near Meerut in Uttar Pradesh.

According to the Mahabharata, Lakshagriha was a labyrinth-like chamber built of highly flammable lacquer by the Kauravas to burn alive the Pandavas, who foiled the plot and escaped through a tunnel.

After three months of digging at one of the biggest mounds in the village, ASI archaeologists found artifacts such as plates, bowls, large cooking pots and pitchers, but no trace of lacquer — not known to survive for long.

Thanesar, just adjacent to Kurukshetra, is a place of importance from archaeological point of view. An archaeological site museum, a first-of-its-kind in Haryana, has been set up here to enlighten people about the history of Thanesar, which was revealed by archaeological excavations carried out here by the Archaeological Survey of India. Many varied interesting things have been unearthed from the mound, such as stone and terracotta sculptures, coins, ornaments, ritualistic objects, etc. An exhibition at the museum displays these finding.

The Archaeological Survey of India (ASI) has found mind-boggling ancient remains from the soil of Sanauli in Uttar Pradesh’s Baghpat district. Reportedly, the burials are as old as 2000BC-1800 BC and belong to the Mahabharata period.

Furthermore, the previous burial pits were found at Rakhigarhi, Kalibangan and Lothal; in a first-of-its-kind discovery, chariots have been found besides royal burial pits in India. At least three burial pits have ornamental coffin lids, embellished with floral designs and anthropological patterns. The swords unearthed here have copper coated hilts and a medial ridge, making these quite suitable for warfare activities. A torch, daggers and shields have also been dug up. As per the archaeologists, all these discoveries confirm that the people of that era were a warrior class.

The ASI officials reportedly told the press that in all likelihood, a horse was used to drive the chariots. In fact, the chariot looks similar to the ones discovered in Mesopotamian cultures. The chariot is without spokes, and has solid wheels. In another pit, the ASI team discovered a protective crown or helmet generally worn by the chariot rider.

As of now, archaeologists opine that it is hard to tell the precise time of the unearthed burial items; they are of the opinion that the chariots and coffins do not date back to the Harappan Civilisation.

In early 2018, Satender Kumar Maan, the village Pradhan of Sanauli, stumbled upon the artefacts etc. while working on his agricultural land. He informed the district officers, and soon, the ASI officials were intimated about the discovery. The ASI team worked for three months to unravel the Bronze Age items. For now, the officials have decided to move the discovered objects to the Red Fort Museum of Delhi for more examination.

In the Vedas and its history books we have plenty of astronomical readings possible only if someone was watching the sky at that time. In this way many dates can be established in a scientific and indubitable form.

In the Maha-bharata we read that nuclear weapons were used. So:

A layer of radioactive ash that was found in Rajasthan, India.
It covered a three-square mile area, ten miles west of Jodhpur. The research occurred after a very high rate of birth defects and cancer was discovered in the area.
The levels of radiation registered so high on investigators’ gauges that the Indian government cordoned off the region. Scientists then apparently unearthed an ancient city where they found evidence of an atomic blast dating back thousands of years: from 8,000 to 12,000 years.
Of course these dates are questionable but at least draws a shadow on the statements of scholars who seal the Vedas as books of mythologies.

What we hold is the contrary: the stories told in the Vedas really happened.

Could we say more? Could we published pictures, videos and official documents? Yes we could, but we need somebody to organize all of this.