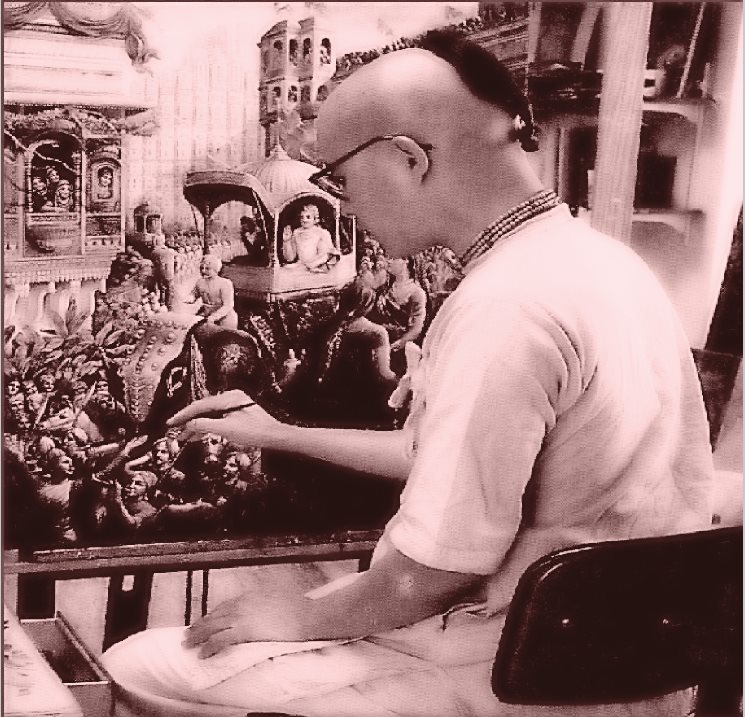 He was an offenseless, gentle soul, full of devotion for Lord Krishna. A complete artist: painter, singer, musician, etc. Although highly qualified in many fields, he was humble like a straw. His kirtans and paintings are a treasure for devotees now and always. His smile was as bright and welcome as the full moon. A dedicated and genuine disciple of His Divine Grace A.C. Bhaktivedanta Swami Prabhupada, liked by all, and a responsible husband to his chaste wife Dhrti devi dasi.

With the departure of Ramadasa Abhirama dasa Prabhu, this world has lost a rare gem and he will be missed.

Note: below is a short story of Rama dasa Abhirama dasa’s joining the movement in Los Angeles in 1975.

Bhakta Director: Today I would like to tell the story of how Rama dasa Abhirama dasa Brahmacari, became Srila Prabhupada’s disciple. Do you know him?
BPN: Yes, we had the fortune of having Rama dasa Abhirama dasa lead a blissful kirtana with our afternoon chanting party down Oxford Street this week!
Bhakta Director: He first learned how to play the mrdanga in 20 minutes.
BPN: That sounds almost impossible.
Bhakta Director: Well, he was a professional drummer for many years before joining ISKCON.
BPN: How did he first come in contact with the devotees?
Bhakta Director: I believe initially he received some of Srila Prabhupada’s literature and then he visited one of our temples.
BPN: What kind of reception did he get when he came to the temple?
Bhakta Director: I just talked with him in a friendly manner and finding that he had some genuine interest, advised him to stay with us at the temple for a while to experience Krsna conscious lifestyle. And he agreed to. After a few days he became convinced about the authenticity of ISKCON and accepted Srila Prabhupada as a bona fide spiritual master. It was surprising to him that in such a short period of time he had made such a big decision. He had many entanglements. For example, he was in a successful band; he had purchased his own condominium (a modern townhouse-style apartment) worth approximately $25,000; he had dozens of marijuana plants gleefully growing in his patio greenhouse; he had beautiful girlfriends; and he had offered some friends the chance to stay in his place for a while.
BPN: It seems incredible how you got him to stay with all these material attachments.
Bhakta Director: We first went to his house. Fortunately no one was there. So carefully I began to suggest how that everything belonged to Krsna. He was very timid but intelligently he knew that he would have to become free from these attachments in order to advance in Krsna consciousness. He asked whether he should sell the marijuana and give the money to Krsna. I told him that might cause further implications. So together we fed the kitchen garbage disposal all the ganja plants, leaves and branches- a 1 1/2 hour feat.
BPN: Did he sell his house?
Bhakta Director: He wanted to, but his father had different ideas. Although Rama dasa (formerly Kevin) had purchased the house with his own band wages, his father served as a co-signer on the house, so unfortunately, as in many cases, the parent thinking that his son was insanely being misled, completely refused to cooperate. Upon seeing the foreboding forecast of future family frustration I suggested that Kevin not worry about getting the house or selling it, but instead simply apply his attention to the blissful execution of Krsna consciousness in the association of the devotees. No amount of money is as valuable as one’s most precious gem, devotional service for Vasudeva.
Another interesting point was when we were deciding which things to take from his house back to the temple, he mentioned that he was an artist. I said “Please show me some of your work.” So he pointed out some framed modern art which appeared to me to be the master splotches of a color-blind three-year-old. However, in order to encourage him I said “Oh, that is beautiful, you must paint some pictures of Krsna.”
BPN: Did he ever actually paint pictures of Krsna?
Bhakta Director: After his basic 3 month Bhakta Program training course, we had him draw a pen sketch of Srila Prabhupada. When the BBT Art Dept. saw it they said “This drawing is almost comparable to Murlidhara’s.” So his career had begun and now you’ll see his paintings in the Srimad-Bhagavatam Canto 8, Part 2, “Indra and Bali Maharaja”, Canto 8 Part 3 “King Satyavrata and the Seven Sages”, Canto 9 part 1 “Durvasa Muni Cursing Maharaja Ambarisa and Invoking a Fire.