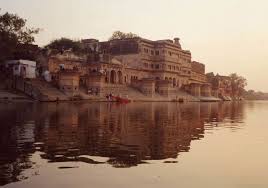 This provides a description of a tour through Vrindavana, the Holy Land of Lord Krishna where He displayed many of His most intimate pastimes. Thus, we can see that the stories found in many of the ancient Puranas, or the Mahabharata are not merely myths or legends, but we can see the places where they actually happened. We start in Mathura, then go to Gokula, Vrindavana, and then to other places in the greater area of Vraja, or Vraja-Mandala. Our description begins below the detailed map.

GOKULA
Six kilometers south of Mathura is the small town of Gokula next to the Yamuna River where Krishna lived during part of His childhood. There are several temples here, such as the Gokulnathji Mandir and the temple in the reconstructed fort, Nanda Qila, of Krishna’s father, Nanda Maharaja. Across from the temple are diorama displays of Krishna’s Gokula pastimes. These temples are interesting to visit, but the priests often act like they simply want to make a business of doing special pujas for you and then charge you high prices for them, like 125, 250, 501, or 1001 rupees. So if you do not want this, be sure to tell them you simply came for darshan and then leave a small donation you can afford. Nearby is also a shrine that is the entrance to an underground chamber, located down a few flights of stairs, that has the deity of Mayadevi, who appeared as Krishna’s sister. She appeared from Mother Yasoda but was put into the arms of Mother Devaki by Vasudeva, Krishna’s father, to fool Kamsa into thinking that their seventh child was actually a girl. King Kamsa was waiting for their seventh child to kill Him since he had heard that he would be killed by their seventh child, who would be Lord Krishna. However, when Kamsa learned that their seventh child was born, he went to the prison where he had kept them to see this child. But, instead of Lord Krishna being there, it was Mayadevi who rose up into the air and escaped his clutches. She warned him that the child he was looking for was born elsewhere, and then she disappeared.
Two kilometers south of Gokula is Mahavana where there is the Nanda Bhavan temple on a small hill. Inside are large images of Nanda, Mother Yashoda, Balarama, and baby Krishna. The pillars are said to have come from the original palace of Maharaja Nanda. This is also near the janma-bhumi or appearance place of Lord Balarama. A short ride away is the Yamalarjuna Bhanga, also called Ukal Bandan, where you can see an ancient grinding mortar said to be the one Mother Yashoda tied to baby Krishna in order to try and get Him to stay in one place. But He dragged it between two Yamalarjuna trees and caused them to crash to the ground. When the trees fell, two demigods were freed who had been cursed to live as these trees for offending Narada Muni. However, Narada Muni had also blessed them to eventually be freed by Lord Krishna. Then the two demigods were allowed to return to heaven. The Srimad-Bhagavatam explains all of these pastimes.
A kilometer further south is Brahmanda Ghat, which is not only a beautiful and serene bathing spot on the Yamuna, but also where Krishna’s mother suspected Him of eating dirt. When she looked in His mouth she saw the whole universe. This place is a quiet place much of the time, but when you go during the month of Kartika (Oct-Nov) when many people come to Vrindavana for pilgrimage, the place can be very crowded with busloads of people doing their sacred bath and getting darshan of the local Krishna deity.
A short ride further south is Chinta-garam Ghat. This is indeed a very quiet and lovely spot along the Yamuna. Only a few sages live here with their cows and a small temple with a few deities of Krishna and a Shiva Linga. It is soothing under the tree and sitting in the sand. This is the place where Mother Yasoda visited in order to soothe her mind after being confused by seeing the universe in her son’s mouth. She could not fathom that such a sight could be seen in Krishna, so she had to come here to calm herself. So even today it is a nice and quiet place with the only sound coming from the wind and the birds in the trees.
Seven kilometers further south is the Dauji temple. Dauji is the deity of Lord Balarama that was originally installed 5,000 years ago by King Vajranabha, Krishna’s great-grandson. In fact, he established a number of Krishna deities in the area. The present temple was built 200 years ago by Shyama Das of Delhi. Many people also attend this temple to get darshan of the single deity of 6 feet tall Lord Balarama. From the other side of the temple, you can see the deity of Revati, Lord Balarama’s wife. Nearby is the Balabhadra Kund or Kshira (milk) Sagara (sea) where the deity of Lord Balarama had been hidden during the Moghul invasion. Near this kunda is a temple to Harideva and in the bazaar is another temple to Banke Bihari.