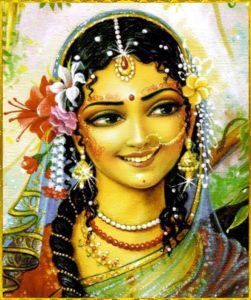 Upon his arrival they both got up to greet him and after respectfully seating him, they immersed themselves in discussion of the nectarean pastimes of Sri Sri Radha-Krishna.

At that time Srila Rupa Gosvami was composing some hymns in praise of Srimati Radharani, collectively known as “Catu Puspanjali”.

Sanatan Gosvami, while reading these, came across one verse:

Here “byalangana phanam” means that the braids of Radharani’s hair appeared very beautiful like the hoods of a snake.

“Is that a proper comparison ‘like the hood of a poisonous snake’?”

At noon Sanatana came to the banks of Radha-kunda, and after offering prayers there, he began to take his bath.

Then, on the opposite bank of the kunda, he noticed some cowherd girls playing under the shade of a large tree. As he watched them from the distance, it appeared that a black snake, hanging from the tree, was about to wrap itself around the neck and shoulders of one of those cowherd girls.

Sensing some danger he called out to her,

“Ohe Lali! Look out! There is a snake just behind you!”

But the girls were absorbed in their play and didn’t take notice of him.

So he immediately took off running to save them from the impending danger.

Seeing him approaching them, Srimati Radharani and Her friends began to laugh. He saw that there was not any black snake, it was Radharani’s hairs.

Sanatana was completely stunned but then gradually the understanding came to him that Sri Rupa’s comparison was appropriate.