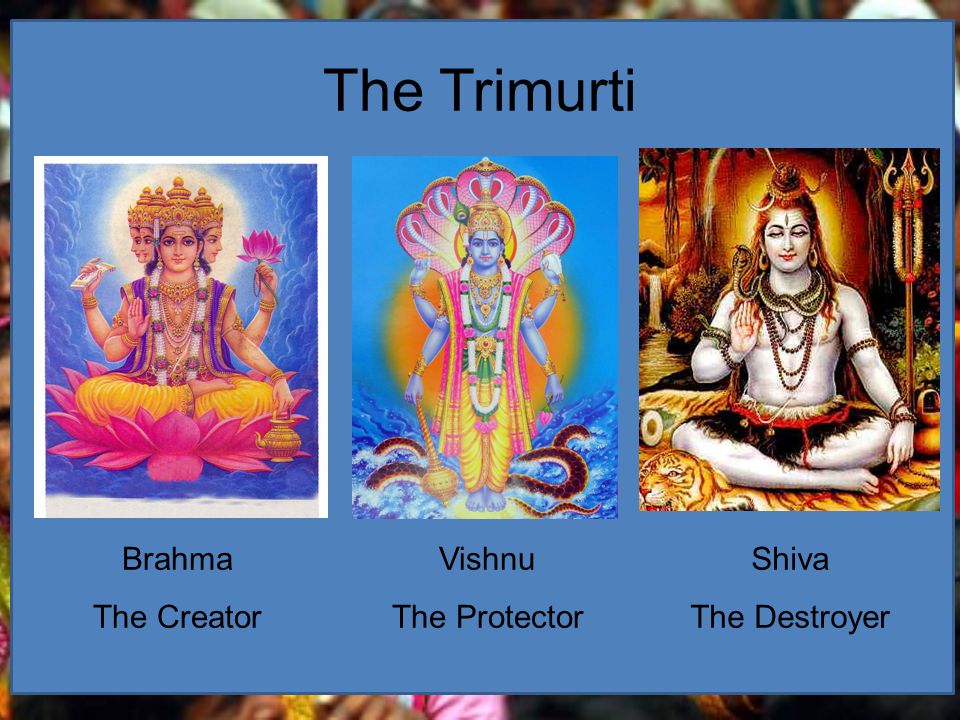 The eternal atman is entrapped within successive temporary bodies made of matter (prakriti). Everything made of matter undergoes three stages of existence – (1) it is created, (2) it remains for some time and, (3) it is inevitably destroyed. These three phases correspond to the three gunas – qualities or modes of material nature. Passion (rajas) creates, goodness (sattva) sustains and ignorance (tamas) destroys. These three are ranked hierarchically, with ignorance considered the lowest and goodness the highest. Each member of the Hindu trimurti representsone of the three gunas.

All material phenomena can be analysed in terms of the gunas. According to the soul’s preference for a particular mode, it takes on a corresponding body. A person influenced mainly by goodness will be elevated to the heavenly planets at death. Those largely in passion stay in human society, and those infected with ignorance enter into the lower species. Only pure souls, transcending even sattva guna, attain liberation ( Moksha ) and escape the entanglement of matter.

The word guna literally means “strand” or “fiber” and implies that, like strands of a rope, the gunas are woven together to form the objective universe. Philosophically, the theory of the gunas explains what this universe is made of and how it came to manifest itself as mind and matter; awareness of the gunas tells us whether we are genuinely moving forward in life (sattva), running in place (rajas), or losing our way (tamas).

Each guna has its own characteristics. The essence of sattva is to act like a transparent pane of glass, allowing light—the light of conscious awareness—to reveal itself in the operations of the mind and in nature. Sattva is not enlightenment itself but it unveils what is true and real (sat). It shows itself as beauty, balance, and inspiration, and it promotes life, energy, health, and contentment. Cultivating sattva—by making choices in life that elevate awareness and foster unselfish joy—is a principal goal of yoga.

Rajas is the energy of change. It is distinguished by passion, desire, effort, and pain. Its activity may cause movement either toward sattva (increased spiritual understanding) or tamas (increased ignorance). Thus it may act positively or negatively. But it is most often characterized as unsteady, agitated, and unhappy—prompting change for change’s sake alone. If freshly picked tomatoes are sattvic, spicy tomato sauce is rajasic—good for a Friday night pizza, but perhaps not an everyday meal choice. Rajas brings happiness by prompting the coupling of the senses with their objects. Thus rajas also binds us to attachment, to the fruits of action, and to sensory pleasures of every kind.

Tamas conceals the presence of consciousness. It causes dullness and ignorance through its power to obscure. Its nature is heavy and dense. One Sanskrit synonym for tamas is sthiti, or “steady.” In its more sattvic garb, tamas can supply a steadying influence in life—for example, bed rest can lead to healing. But tamas is primarily immobilizing: tamasic foods are lifeless, stale, or impure; tamasic entertainment is mindless and intoxicating. Tamas leads to inaction when action is required. Each of us has experienced the binding power of tamas—the appeal of lethargy, procrastination, and sleep.

The three gunas are constantly interacting with one another. We can discern hints of this interplay in English phrases such as “innocent pleasure” (sattva-infused rajas) or “rabid addiction” (rajas-propelled tamas). But while the gunas themselves are permanent in essence— having emerged from primordial nature (prakriti)—their interactions are transitory and afford only a false impression of permanence. In this way, the play of the gunas obscures the real (sat), and attracts and binds us to what is ultimately unreal (asat).