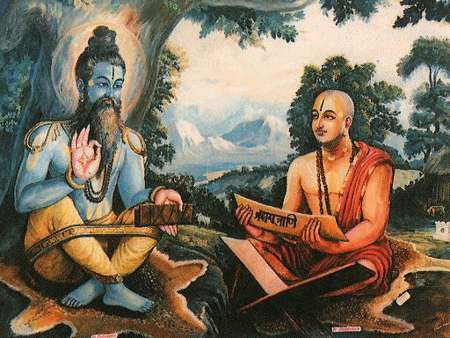 Sri Madhvacharya (1238-1317 A.D), also known as Vasudeva, Ananda Tirtha and Purnaprajna, is one of India’s greatest saint-philosophers. He was born of Tulu speaking parents at Udupi, Karnataka. The young Vasudeva, (Madhva’s boyhood name) expressed a desire to become an ascetic when he was eight years old.

Madhva’s parents naturally objected and so it was not until he was about 16 years of age that he was able to leave home and become a sannyasi. From then on the young Vasudeva became known as Ananda Tirtha, the name given to him by his sannyasa guru. Ananda Tirtha later assumed the name Madhva by which he is most commonly known today.

The philosophy he preached was previously known as ‘tattvavada’. Now it is known as ‘dwaita’. He boldly told a Muslim king: “By whatever name you may call, God is One.” He maintained that one’s religion is not decided by birth but by his nature and personality.

Shankaracharya’s advaita-vedanta produced a profound dissatisfaction in the mind of the young Madhva, which often brought him into conflict with his teachers. In fact Madhva’s objection to advaita-vedanta became the most compelling force in this life and he spent much of his adult life arguing against this view of the world.

After studying in Udupi, Madhva traveled to Tamil Nadu where he continued to meet and debate with advaita scholars. Madhva soon returned to Udupi, but after a short time he left to visit Veda Vyasa at Badari in the northern Himalayas. Many months passed and when he finally appeared he was resplendent and joyful. He had received the blessings of Vyasa. Upon his return to Udupi, he immediately began to write his famous Brahma-sutra commentary.

Soon Madhva started his own temple in Udupi by installing a beautiful Deity of Bala Krishna. He obtained this Deity by saving a ship in distress near the coast of Udupi. Madhvacharya signaled the

ship to shore by waving lamps and flags. Convinced that it was through the grace of Madhva that the ship was saved, the ship’s captain offered him a gift. Madhva chose the clay (gopi-chandana) that was used for the ship’s ballast. Upon washing the clay, Madhvacharya discovered a beautiful Deity of Sri Krishna, which He personally carried to Udupi and began to worship. This Deity of Krishna is still worshipped today in the central temple of Udupi. Madhva’s Udupi temple is one of the most important Krishna temples in India. The lamp beside this Deity of Krishna was lit by Madhvacharya himself and has never been extinguished.

During his lifetime, Madhvacharya wrote many important commentaries on the Upanishads, Bhagavad-gita, Brahma-sutra, Mahabharata and the Bhagavata-purana. The final years of Madhva were spent in teaching and worship. In the end he instructed his followers not to sit still, but to go forth and preach.

His biographers tell how Madhvacharya disappeared one evening while reciting his favorite text, the Aitareya Upanishad.