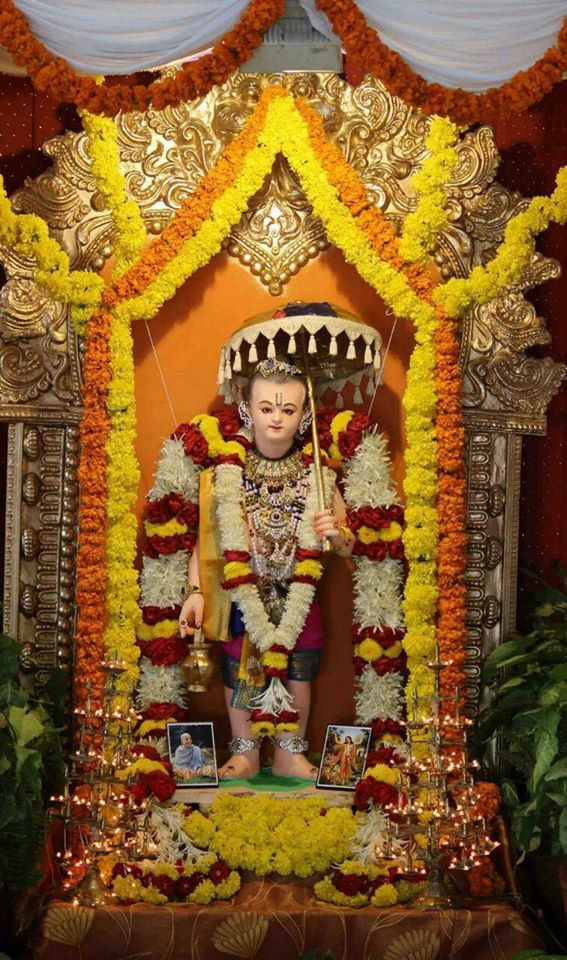 1. He is known by many names, the most common ones being #Vamana (the little dwarf), Trivikrama (he who has taken three step; the giant form), and Upendra (Indra’s younger brother);
2. In every planetary system the denizens worship a particular visnu-tattva as their sole Lord (Plaksadvipa, Surya-Narayana; Brahmaloka; Maha-purusa; Maharloka; Yajna-purusa, et cetera) and in the heavenly planets, the demigods worship Lord Visnu in His plenary portion: the four-armed Vamana;
3. When Indra and the demigods leave Svargaloka temporarily to battle the asuras, Vamana stays behind and protects the Heavens by flying around on the back of Garuda, and pierces demons with His trident;
4. When Vamana took His second step, He pierced a hole through the subtle coverings that surround our universe, and Ganga and Yamuna flowed into our universe through that hole that Vamana made with His toe;
5. Srila Prabhupada had said that to honor festivals such as Rama Navami and Vamana Dvadasi, the devotees could dress up and worship a small boy as the particular avatar. In Mayapur, every year on Vamana Dvadasi a young gurukuli from the Bhaktivedanta Academy is chosen to ‘be’ Vamana for the day. A foot washing ceremony is performed, followed by elaborate offerings of bhoga (he gets to eat whatever he wants!), arati, pushpanjali, and distribution of his maha-prasad.
6. Bali Maharaj is a mahajana, and represents atma-nivedanam, the act of surrendering fully to the Lord, one of the angas of bhakti.
7. Bali Maharaj also become Indra in the next manvantara;
8. Vamana did not kill Bali Maharaj, because He had promised Prahlad Maharaj (Bali Maharaj’s grandfather) as Lord Nrsimhadeva that He would not kill anyone in his family lineage, before or after his time;
9. Vamana eternally resides on His personal planet in Vaikuntha, and as the door-guard to Bali Maharaj’s kingdom in the lower planetary systems, as well.
10. Once Ravana tried to force himself into Bali Maharaj’s kingdom. Vamana kicked Ravana with his toe and sent him flying 10,000 yojanas away.
11. When Vamana pushed Bali Maharaj down to Sutalaloka, Bali Maharaj received special permission from the Lord to visit his kingdom on earth once a year, the day of Onam.