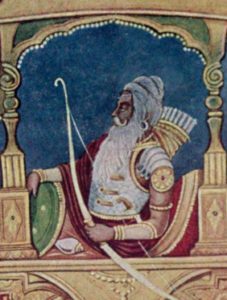 Their departure did not go unnoticed. Duhssasana, seeing them leave in freedom, understood that their father had been afraid and had listened to the advice of Bhishma and the others. He immediately ran to his brother and told him what had happened.

“It is no longer a game,” said Duryodhana, frightened, “the Pandavas have sworn to kill us all and they will not have peace until they do. It is now better for us to play our cards openly against them or they’ll have plenty of time to organize themselves. We have to get our father to call them back and play again. I’m sure we’ll win again and then we’ll force them to go into exile. “

It was not at all easy to get Dhritarastra to act like that, but he too agreed that the nephews, being free, at that moment were a sure threat, so with his intelligence confused by the plots of the divine will, could not reject the idea.

And they played again.

Defeated, the Pandavas lost their kingdom and were sentenced to spend twelve years in the forest and one year in disguise. Yudhisthira came out of the Sabha without saying a word.

The same day, accompanied by their wife, the Pandavas prepared for their departure.

At that point the Kuravas were again masters of the whole kingdom and of vast riches, but from that day Dhritarastra, frightened by the thought of the Pandava’s revenge, did not have a single moment of peace.