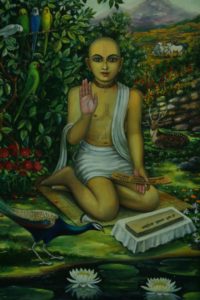 Some months had passed since Jiva’s initiation, and a traveling scholar named Rupanarayana Saraswati came to Vrindavan. He was well-known as one of the most learned men in the country and it was said that he could not be defeated in philosophical debate. In fact, he was called a Digvijayi, which meant that he was “a person who had conquered everyone in all directions.”

His pride, however, was as vast as his learning. And as he went from village to village in order to wrangle with local scholars, he demanded a jayapatra, or a “certificate of victory,” from his opponents.

By this time, Rupa and Sanatan were known all over northern India as the greatest of all scholars. In Rupanarayana’s usual arrogance, he rudely challenged the two famous brothers to a debate. When Rupa and Sanatana declined, the proud Rupanarayana said,

“You are obviously frauds! If you were as learned as people say you are, you would both accept my challenge.”

With great humility, Rupa and Sanatan said that their reputation was exaggerated by well-wishers and that they were in fact not fit to debate such a learned and undefeatable individual. Rupanarayana was greatly pleased to hear this. Immediately thinking of his reputation, he asked for his usual jayapatra so he could show others that he had defeated Rupa and Sanatan. Without any hesitation, the two humble brothers signed his certificate and sent him on his way.

Blinded by vanity, Rupanarayana felt that he was now the greatest scholar of all time. He completely neglected the fact that he had defeated Rupa and Sanatan only by default and that it was their sheer humility that allowed him easy victory.

Rupanarayana demanded that Jiva enter debate with him, for once he defeated Jiva, he said, his reputation would be uncqualcd. As Jiva listened to the distasteful boasting of Rupanarayana, he felt an intense urge to silence him once and for all. Jiva’s youth got the better of him. Although his uncles avoided wasting valuable time in some mundane debate, Jiva accepted the challenge.

Young Jiva spent seven days on the banks of the Yamuna trying to vindicate the reputation of his uncles. On the final day, the contest of scholarship was complete. Jiva had won the debate. After this, Rupanarayana went away in great shame and was never seen again in Vrindavana[1].

[1] The Rupanarayana story is told in Nityananda Das, Prema-vilasa. The story is also recounted in Bhakti-ratnakara, but with certain modifications. For instance, Rupanarayana’s name is changed to Ballabha Bhatta. However, some say that the Ballabha Bhatta incident is a different pastime altogether.

This is a section of the book “Jiva Gosvami Prabhupada”.