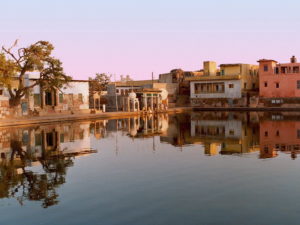 King Kamsa was threatened by a heavenly voice that he was going to be killed by his sister Devaki’s still unborn son. So when the child (Sri Krishna) was born, Kamsa had all his friend and associates to go looking for this child and kill him.

One of these demoniac personalities was Arista, who took the form of a gigantic bull and ended up being killed by Krishna. The fight lasted one hour and at the end Radha Kunda was created by Radharani and the Gopis and Syama Kunda by Krishna. This was done around midnight.
The village who arose from that place was called Aritgram (Aristagrama), today known as Radha Kunda town.

For many years the exact day of the two kundas’ appearance day was not under discussion: it’s in the astami (eight) day of waning moon of Kartika, during the day called Bahulastami.
We were never corrected by Srila Prabhupada or anyone else, we also saw that most of Gaudiya Math was observing it in Bahulastami and hundreds of thousands of devotees go to Radha Kunda during that day. I myself observed Radha Kunda Prakat night in Radha Kunda. It has been an unforgettable transcendental experience being there during that night.

But the beauty of our culture is that you can never be sure that what you know is correct or in this case I should say complete. There is always something else to discover.

In fact few years ago one devotee told me that the real day of the appearance of Sri Radha Kunda was not in Kartika (October – November) but in Purnima Caitra (March – April). This year (2020) Radha Kunda Prakat would have fallen on the 7 of Abril in the zone where we live.
We didn’t discuss it much and the conversation ended there.

In the last days the topic came up again. Since you cannot write a long article everytime you open the mouth, I answered very briefly that Radha Kunda Prakat is in Bahulastami but I promised myself to go back to the topic in a few days.

When the appearance of Radha Kunda actually happened?

According to some, Srila Jiva Gosvami (sources has not been by me verified) has stated that Radha Kunda appeared in Purnima of Caitra Masa.
Then why Gaudiya Vaisnava every year bathe in Radha Kunda during Bahulastami? The reason is that Sri Caitanya Mahaprabhu discovered Radha Kunda in the day of Bahulastami during his visit of Sri Vrindavana Dhama. We find evidences of this in Caitanya Caritamrita and other scriptures.
Since we are Lord Caitanya Mahaprabhu followers, we give the same importance to the “discover” of Radha Kunda (which had long disappeared) as we do with the actual “creation” of Radha Kunda and Syamakunda by Radha and Krishna.

Therefore both days are bonafide moments to glorify Sri Sri Radha Kunda, the holiest of Sridhamas and can be called “Prakatas”, appearance days.