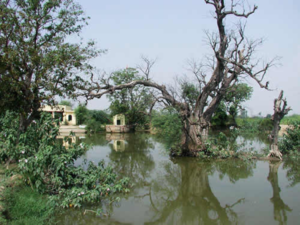 The forest of Vilachuvana has now disappeared but the beautiful Vilachu-kunda can still be seen.

It is said that during the attack on Vrindavana by the Mughal tyrant Emperor Aurangzeb, the deity of Lord Harideva was hidden in this kunda for some time before being moved to Barauli.

This very beautiful and secluded kunda within the forest of Vilachuvana, was a favorite sitting place of Radha and Krishna, where They would spend hours just sitting and talking to one-another.
There is also an old stone bench which is now broken where it is said the divine lovers used to sit.

On one occasion, Radharani lost Her ankle-bell here and began searching for it.
When Krishna arrived, He jokingly asked Radha if she was looking for His flute that had been lost.
Radha told Krishna to stop joking and help look for the lost ankle-bell (nupura).
When Krishna persisted in making jokes, Radha became angry and refused to talk with Him.
In order to pacify Radharani, Krishna got down on His knees and started to franticly dig up the earth with His bare hands while searching for the ankle-bell.
To Radharani’s utter amazement, Krishna began digging up all kinds of ankle-bells, some of them were made of silver, and some of them were of gold, Krishna also dug up a few precious gems as well.
Placing all the ankle-bells before Radharani and with a beautiful smile on His face, Krishna asked Radharani which of the ankle-bells was Hers.
Feeling great happiness at Krishna’s endeavor to please Her, Radharani immediately embraced Krishna and They both sat down on the bench to enjoy Their intimate love-talks. 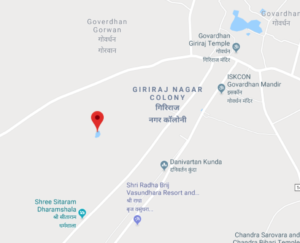 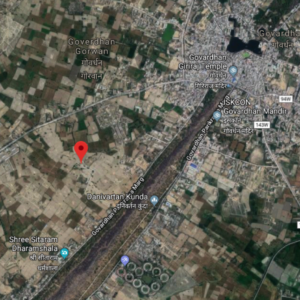 Due to these pastimes between Radha and Krishna, this forest is also called Vilasavana, which means the ‘forest of ambrosial pastimes’.

As it is outside the Govardhana Parikrama route, not many devotees visit Vilachu Kunda. However it is a place that should be visited.