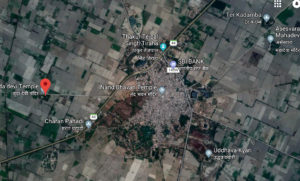 The word ‘kyari’ means a ‘garden’ that is being systematically cultivated and also regularly watered.

This particular garden was situated within the kunja or forest grove of kadamba trees belonging to Vishakha-sakhi, whose kunda is also nearby.

When Krishna left Vrindavana, all the residents especially the gopis, drowned in an ocean of sorrow due to separation from their beloved Krishna.

Therefore, Krishna requested His dear friend Uddhava to take a message to the gopis on His behalf.

This is the place where Uddhava met the gopis and delivered the message sent to them by Krishna.

At that time, after receiving Krishna’s message, Srimati Radharani entered into the state of ‘maha-bhava’, the top most ecstatic expression of pure love of God.

Uddhava was extremely surprised to see the high level of spiritual advancement of Radharani as well as the gopis, and therefore desired to take the dust of their lotus feet on his head.

To fulfill Uddhava’s desire, Krishna allowed him to take birth as grass next to Kusuma-sarovara, so that when the gopis came there to pick flowers, they would trample on the grass and in this way Uddhava could receive the dust from their lotus feet on his head.

Uddhava Kyari is located in a very isolated spot on the parikrama path of Nandagrama where one can also see Uddhava-kunda.

This place is also known as Udho-kriya-sthana, which implies that ‘Uddhava completed the important task’ given to him by Krishna, when he conveyed Krishna’s message to the gopis of Vraja at this spot.

Uddhava remained in Vrindavana for ten months and wherever he went, he spoke about the wonderful pastimes of Krishna.

Due to Uddhava continually describing Krishna’s pastimes, it was as if Krishna was still present in Vrindavana.

The Vrajavasis much appreciated Uddhava being present amongst them and by hearing about their beloved Krishna; they appeared to get back their life.

In the Bhakti-ratnakara it says:
“Uddhava felt fortunate to see the activities of the gopis. He had come to console the cowherd men like Nanda, but felt restless by seeing the wonderful display of the gopis loving sentiments.”

It is said that by seeing this place known as Uddhava Kyari, one will achieve perfection in all his activities. 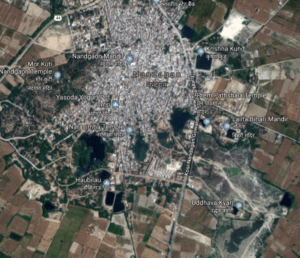 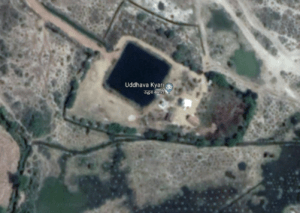