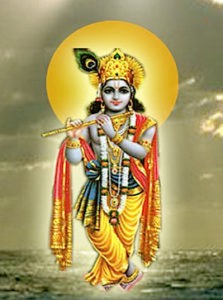 Radha’s deep love for Sri Krishna was apparent by its numerous symptoms. As Jatila became aware of it, she became increasingly anxious.

One day she called for her daughter Kutila and spoke to her privately.

“My dear daughter! I am simply unable to protect my daughter-in-law from that Krishna any more!
Alas, alas!
What should I do? What should I do?
Kutila! I have decided on a remedy; will it be possible for you to assist me? There must be some way to prevent Radharani from going outside the house.
She Who is bitten by the eager glances of that snake-like son of Nanda must be protected by being kept indoors at all times. There is no other remedy.
Therefore, you should always be alert to keep Her carefully here.
Don’t let Her go to the Pavana Sarovara or to the Yamuna river to bathe.
Prevent Her from going out to the pond Surya-kunda for performing Her usual daily worship of the Sungod.
Thus, there will be no possibility whatsoever of Her meeting with that debauchee.
From now on, you will have to see that She bathes and worships the Sun-god here at home.
And now that we are keeping Radhika here, that rascal debauchee may try to come into our home somehow or other, at any time of day or night. For this reason, I will personally keep vigil 24 hours a day by the outer gate with a big stick in my hand.”

Upon hearing her mother’s words, Kutila replied:
“Mother, it is not possible to check the movements of your daughter-in-law.
How can we stop Her from leaving the house, when every day without fail Vrajesvari Yasoda summons Her to cook for her son?”

Jatila:
“My dear daughter, go to Yasoda now, and tell her that starting from today, my daughter-in-law will not be leaving our house to go anywhere.
Tell Vrajesvari that she can engage Rohini to cook for her son.”

Kutila:
“But Mother, Yosoda will surely say:
“Radha has been granted an extraordinary boon by Durvasa Muni. It is a blessing that words alone cannot describe. Everyone in Vraja-mandala knows that because of this boon those who partake of Sri Radha’s cooking will live long and have all of their obstacles destroyed.”
Vrajesvari will then say:
“Krishna is my only son. Eating the food cooked by Radha enables Him to remain safe and well and free from the obstacles created by wicked demons. That is why I try to ensure that daily He eats food cooked by Her hand.”
When she says that, what answer should I give?”

Jatila:
“When Yasoda says all that to you, then you just tell her,
”Oh Yasoda! Durvasa certainly gave Radha this wonderful boon; therefore, whoever she touches lives a long life.
Oh knower of all the rules of proper social conduct! By that very boon, do you want Radha to come to your house every day just to have Her touch your own Son?
And furthermore, it is contrary to the proper rules of etiquette for chaste daughters to cook in another’s home on a daily basis.
Such a black spot against a chaste daughter is certainly talked about throughout all the land.
Therefore, we cannot tolerate any more of this. Just as you have love and affection for your son, do you think that we don’t have similar love and affection for our Daughter-in-Law?”

Jatila continued:
“You should then say,
“So now you have heard my reasons for not sending my daughter-in-law to your house.
If you remain determined to feed your son with food that Radha has cooked, then send Dhanistha to my house three times a day to fetch modaka , laddu and other sweets that She has made for Him.”
Explain everything to Vrajesvari.
If she becomes infuriated, we will leave her town and move elsewhere.
I will do anything to save my daughter-in-law from that licentious son of hers.”

After consulting together in this way, Jatila sent Kutila to inform Yasoda of the new decision.

Thus, she succeeded in confining Radha to the house.
Being restricted in this way, the resultant burning suffering which is felt by Radha and Krishna due to being unable to see each other is so intense that it could not possibly be described even by Sarasvati herself.

To extinguish Radha’s burning fire of separation from Krishna, the Sakhis made Her a cooling bed of lotus petals smeared with a paste of camphor and sandalwood.
However, when Radha touched that bed, the petals instantly withered and dried with the heat of Her fevered body.

How will Sri Radha be able to pass twenty-four hours without seeing Sri Nanda-nandana .
She cannot tolerate even those brief moments when Her eyelids blink and Her vision of Him is obstructed. She condemns Brahma, the creator, for creating eyelids, and prays to be born as a fish with eyes that never close.

Thus falling down senseless upon the flower bed, burned by the fever of Krishna’s intense separation, Radharani became completely unaware of Her surroundings; if anyone tried to address Her, the words did not even enter Her ear, and She just lied there with Her dazed eyes completely motionless and blind.

When, on Yasoda’s order, Dhanistha arrived there , she saw Radha’s condition of burning in separation from Krishna.

Dhanistha said:
“My dear Lalita! Since Vrindavanesvari Sri Radha didn’t come to Nanda-gram for cooking today, Rohini had to cook this morning.
Krishna ate those grains anyway and then went to the forest to tend His cows.
However, Yasoda was so upset that He did not eat the food as it was usually cooked by Radharani on other days; thus, she has sent me here to see that Radha makes some sweetballs, which I will then bring for Krishna.
After helping Her to make the sweets, I will take them so that Krishna can eat them tonight at dusk, in the later evening, and tomorrow morning before He goes to the pasture with the cows.
But Radharani has now fallen unconscious.
Alas!!!
How will the sweetballs ever be made? What should I do now?”

Unable to see any other solution, Dhanistha went over to Sri Radha and loudly spoke into Her ear:

“O Radha, just look; Krishna is standing right here before You! Open Your eyes and look at Him.”

As soon as these words entered Her ears, lotus-eyed Radharani regained consciousness .

Dhanistha:
”O Radhe! Krishna is not able to eat properly unless He takes the foodgrains which are cooked by You. For this reason, Yasoda has sent me to You.
Please make Him some sweetballs with Your own hand.”

The lotus-eyed Radha, although burning horribly in the agonizing fire of separation, immediately became enthused with great energy upon hearing these words .

Calling Rupa Manjari close, She said,
“Rupa Manjari! Quickly prepare the stove, light the fire and bring the cooking pot!
Following the order of Yasoda, I will now prepare and send eatables for Krishna.
Dear girlfriend!
Rather than the usual quantity of sweetballs that I make every day, today I will make four times that amount.
Don’t you worry at all about my ill health.”

A moment earlier Sri Radha’s bed of lotus petals had withered and dried with Her burning touch, but now, as She made sweets for Her beloved, the flames of the stove cooled Her body.

The uppermost realm of prema possesses amazing and inconceivable potency, in which the cooling moon can radiate scorching heat and fire can cool.
How can anyone ever understand such prema?
And how can one who has taken the shelter of such prema ever be understood?

Lalita then said:
“O Dhanistha! Will abundant rain not fall from the lightening-filled cloud?
Will the fresh new rain cloud , inlaid with the creeper of lightning , appear no more?
If this rain cloud does not appear, there will be no shower of rasa , and the sakhis’ harvest of ecstatic bliss will wither and be utterly destroyed.”

This is a section of the book “Camatkara Candrika (in English)”.