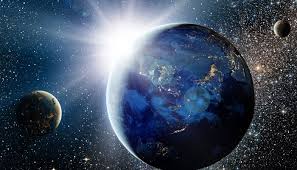 Question
His Grace: Dandavats. All glories to Srila Prabhupada!

A few years ago you wrote a rebuttal with quotes from Srila Prabhupada to the flat earth theory who have infiltrated our congregation.
If I could pass the quotes of Prabhupada where he explains that there are two Earths?
For that is based on the Bhagavatam Commentary of Srila Vamsidhara, who was one of the sources of Srila Prabhupada and Srila Bhaktisiddhanta in their tikas.

Thanking you for your attention, I remain as your servant ***

I wrote a paper on this topic some 18 years ago with many quotes from Guru, Sastra, Sadhu. At that time unfortunately there were not the protections that technologies offer today and I can’t find the file. Probably lost between the few disc crashes I suffered during the remote years.

First of all, the planet (Earth) that we perceive is spherical. It’s not flat. Guru says so, Sastra says so and our senses and intelligence say so.
I’ll soon publish a list of quotes that you can anyway easily find on the Internet.

However there could be a twist on this truth and I’ll try to explain it.

The paper I published time ago suggested that the creation is based on multidimensionality. In other words, depending on our elevation we see things that others can’t see.

In the Sastra we find descriptions of a universe that for us simply doesn’t exist. We can’t see it. We see something different.
Just one amongst many examples, the famous 5th Canto of the Srimad-Bhagavatam. We don’t see Bhumandala, nor Jambudvipa, nor the Ganges coming down, not the Sisumara planetary systems; neither we’ll ever be able to prove that the diameter of our universe is only 4 billions miles, and we can go on and on.
Sukadeva Gosvami was seeing something that only him and advanced souls like him could see. He was describing a different dimension of our same universe.

Ruled out that the puranic descriptions are fantasies, and ruled out that Sastras make mistakes, the only acceptable explanation is that the universe is multidimensional. We see what our senses allow us to see.
The evidences of this fact are innumerable.

In Srimad-Bhagavatam Narada Muni glorifies the intelligence of his father, Sri Brahmaji, saying that his creation was so difficult to understand that even he couldn’t understand how it is made. Now, it is a fact that is not easy to understand the description we study in the Puranas, but it is also not so complicated to put in difficulties Narada Muni. Using a simple software like Excel one can easily arrive to calculate the distances between the Sun and Satyaloka and the distances between the Sun and the bottom of Garbhodaka Ocean. Even us, who have a fraction of Narada’s intelligence, can understand some of it.
So why Narada Muni seemed so impressed?

In the Bhagavad-gita there is an illuminating verse, the 11.8:
na tu māṁ śakyase draṣṭum
anenaiva sva-cakṣuṣā
divyaṁ dadāmi te cakṣuḥ
paśya me yogam aiśvaram
“But you cannot see Me with your present eyes. Therefore I give you divine eyes. Behold My mystic opulence!”
Krishna is saying that Arjuna’s senses were not able to see something that was existing. He needed a more powerful set of senses.

Even Srila Prabhupada once gave a cryptic answer to one of his disciple that alerted my curiosity. The devotee asked him “earth is round and flat, both, together,” and our Acarya said, “yes”.