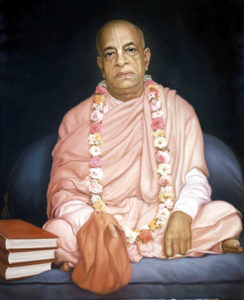 Because it was Ekadasi we skipped breakfast and fasted until noon. But at
lunchtime the devotees inadvertently broke the Ekadasi vow because the cook
accidentally put peas into the vegetables. No one noticed until too late.
Fortunately I arrived late for lunch because I had been massaging Srila
Prabhupada. Just as I was about to eat, Jayapataka Maharaja shouted for me
to stop. Although initially annoyed at being told not to eat, I was relieved
when he pointed out the peas.

Shamefaced, Tamal Krishna Maharaja went to Prabhupada to report what had
happened and to find out what should be done.

Srila Prabhupada told us we were all nonsense. He angrily rebuked us,
“Now you have to fast for three days!”
This shocked everyone.
“Yes, that is the procedure,” he confirmed.

Seeing the stunned look on our faces he relented but said that we should observe Ekadasi for the rest of the day and then again tomorrow on Dvadasi.

Bottom dietary line (and agreed by all) is ‘no beans and grains’
And no peas.