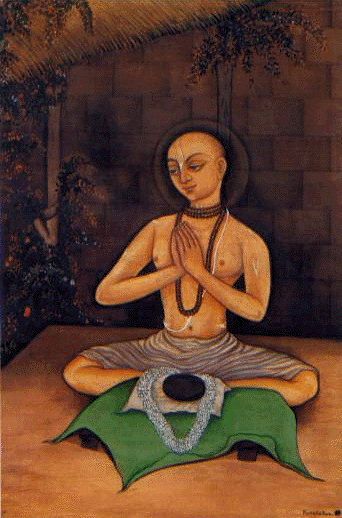 Facing the fire, he should say:

“The Lord is one. By his order all others exist. He, who was the first existing, sometimes appears in the womb like a human being. He has appeared before and will appear again. All men are turned towards Him, who is present everywhere”.

He should take kusha grass in his right hand, and starting from the North side of the mandapa, go around, while chanting:

@ Footnote: Placing the kusha grass around the fire is for protection against Rakshasas.

Going around the second time, he should chant:

While going third time he should chant:

After he should put the kusha in ishanakona (North –East). Then taking them one by one, the straws should be placed on the floor in 3 lines without chanting mantras. He should start from N.E. corner, and make one line of kusha straws touching each other to the S.E. corner.In the same way he should put 2 more lines next to the first one. The lines are touching at the point where they start. In a similar way he should put kusha in 3 lines, starting from S.E. corner and going to S.W. corner. After that 3 lines from N.W. corner to N.E. corner, and from S.W. corner to N.W. corner.

He should offer flowers and candana (which has been offered to the Lord) to the ten directions. saying:

He should take twenty sticks of khadira, palasha, or udumbara wood, or kusha grass, which are of two pradeshas (18 inches) in length. He should pour a sruva of ghee over the middle portion and offer into the fire without mantra while meditating on Vishnu.

Taking two blades of kusha grass with tips intact he should bind them with a third kusha and cut them to the length of one pradesha without using the finger nails, saying:

“Oh pavitras, you are devotees of Vishnu.”

Sprinkling them with water he should say:

“You are pure through the desire of Vishnu.”

vasoh suryasya rashmibhih svaha “May Savita purify you with this faultless kusha, with these rays from the sun.”

He should then offer two more oblations of ghee into the fire in the same way without mantra.

Holding the kushas in his left hand, he should sprinkle water on them and then using the right hand, throw them into the fire.

He should sprinkle the vessel of ghee with water and then lower it into the North part of the fire three times, and then lay it on strewn kusha grass.

The sruva should be made from khadira, palasha or udumbara wood, and of a length of one “aratni” (distance from elbow to tip of little finger). He should purify the sruva by sprinkling it with water, then by lowering it into the North part of the fire three times.

Keeping his right knee on the earth and his left knee raised, he should pour water from his cupped hands from West to East on the South side of the fire, saying:

He should pour on the West side from South to North, saying:

He should pour on the North side from West to East saying:

He should sprinkle water around the fire in clockwise direction:

Virupaksha Japa (prayer to the Lord as Virupaksha):

Raising his right knee from the ground, he should hold fruit, flowers, rice and kusha between his fists, the right fist being above and the left fist being below. He should recite the following:

“I surrender with body, mind and soul to the great, beautiful Personality of Godhead, manifested as Agni, possessed of unlimited eyes and flashing teeth, whose resting place is under a palasha tree, whose golden abode flashes in the sky like lightening, who is accompanied by all the devatas, who are situated in the metal kumbha. Being full of strength, attentive and unblinking, You watch for demons. You are manifest in twelve forms, known as Your sons. Those aspirants who, throughout the years, worship You with sacrifices, achieve the spiritual status of Brahman.

You are the best amongst the devas. May I become the best amongst men by becoming Your devotee. He who is part of the Lord, follows after the Lord. May I thus seek after You. May I not offend by my faulty chanting, my faulty offerings, my faulty activities. I surrender to You; inspired by You, I perform this activity. May it bring me satisfaction. May it bring me spiritual prosperity. May I reach the ultimate goal.

To the many-eyed, smiling Lord, the all pervading ocean of mercy, to the all powerful, all wealthy, all strong, all knowing, all perceiving Personality, the son of Brahma, the Supreme Lord, possessor of all opulences, I pay my respects.”

He should throw the rice to the North East, and give the flowers and fruit to the brahma priest.

Then he should say:

He should throw ghee-soaked wood of pradesha length with flowers and gandha into the fire silently.