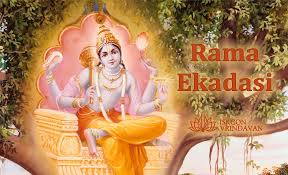 Yudhisthira Maharaj said,
“O Janardana, O protector of all beings, what is the name of the Ekadasi that comes during the dark fortnight (Krishna paksha) of the month of Kartika (October – November)? Please impart this sacred knowledge to me.”

The Supreme Lord, Sri Krishna then spoke as follows,
“O lion among kings, please listen as I narrate to you; The Ekadasi that occurs during the dark part of the month of Karttika is called Rama Ekadasi. It is most auspicious, for it at once eradicates the greatest sins and awards one the passage to the spiritual abode. I shall now narrate to you its history and glories.”

“There once lived a famous king of the name Muchukunda, who was friendly to Lord Indra, the king of the heavenly planets, as well as with Yamaraj, Varuna, and Vibhishana, the pious brother of the demon Ravana. Muchakunda always spoke the truth and constantly rendered devotional service to Me. Because he ruled according to religious principles, there were no disturbances in his kingdom.

“Muchukunda’s daughter was named Chandrabhaga, after a sacred river, and the king gave her in marriage to Shobhana, the son of Chandrasena. One day, Shobhana visited his father-in-law’s palace on the auspicious Ekadasi day. This visit made Shobhana’s wife Chandrabhaga quite anxious, for she knew that her husband was physically very weak and unable to bear the austerity of a day-long fast.

She said to him,
‘My father is very strict about following Ekadasi. On Dasami, the day before Ekadasi, he strikes a large kettledrum and announces,
“Nobody should eat on Ekadasi, the sacred day of Sri Hari !”

“When Shobhana heard the sound of the kettledrum, he said to his wife,
‘O beautiful one, what am I to do now? Please tell me how I can save my life and obey your father’s strictness and at the same time satisfy our guests !”

“Chandrabhaga then spoke,
‘My dear husband, in my father’s house nobody – not even the elephants or horses, what to speak of consenting human beings – eats on Ekadasi. Indeed, none of the animals are given their ration of grains, leaves, or straw – or even water ! – on Ekadasi, the sacred day of Sri Hari. So how can you escape fasting? My beloved husband, if you must eat something, then you should leave here at once. Now, with firm conviction decide on what you have to do.’

“Prince Shobhana then said,
‘I have decided to fast on the sacred Ekadasi day. Whatever my fate is, it will surely come to pass.’

“Deciding thus, Shobhana attempted to fast on this Ekadasi, but he became unbearably disturbed with excessive hunger and thirst. Eventually the sun set in the west, and the arrival of the auspicious night made all the Vaishnavas very happy. O Yudhisthira, all the devotees enjoyed worshipping Me (Sri Hari) and remaining awake all through night, but Prince Shobhana that night became absolutely unbearable. Indeed, when the Sun rose on the Dvadasi, that Prince Shobhana was dead.

“King Muchukunda observed his son-in-law’s funeral, ordering a large stack of wood be assembled for the fire, but he instructed his daughter Chandrabhaga not to join her husband on the funeral pyre. Thus Chandrabhaga, after performing all the purificatory processes and procedures for honouring her deceased husband, continued to live in her father’s house.

Lord Sri Krishna continued,
“O best of the kings, Yudhisthira, even though Shobhana died because of observing Rama Ekadasi, the merit that he accrued enabled him, after his death, to become the ruler of a kingdom high on the peak of Mandarachala Mountain. This kingdom was like a city of the demigods; very lustrous, with unlimited jewels set in the walls of its buildings that gave off light. The pillars were made of rubies, and gold inlaid with diamonds shone everywhere. As King Shobhana sat upon a throne beneath a pure white canopy, servants fanned him with yak-tail whisks. A stunning crown rested upon his head, beautiful earrings adorned his ears, a necklace graced his throat, and bejewelled armlets and bracelets encircled his arms. He was served by Gandharvas (the best of heavenly singers) and Apsaras (celestial dancers). Verily, he resembled a second Indra.

“One day, a brahmin named Somasharma, who lived in Muchakunda’s kingdom, happened upon Shobhana’s kingdom while travelling to various places of pilgrimage. The brahmin saw Shobhana in all his resplendent glory and thought he might be the son-in-law of his own king Muchukunda. When Shobhana saw the brahmin approaching, he immediately rose up from his seat and welcomed him.
After Shobhana had paid his respectful obeisances he asked the brahmin about his well-being and about the health and welfare of his (Shobhana’s) father-in-law, his wife and all the residents of the city.

“Somasharma then said,
‘O king, all the residents and subjects are well in your father-in-law’s kingdom, and Chandrabhaga and your other family members are also quite well. Peace and prosperity reign throughout the kingdom. But there is one thing, I’m quite astonished to find you here! Please tell me about yourself. Nobody has ever seen such a beautiful city as this! Kindly tell me how you obtained it.’

“King Shobhana then began to tell his story,
‘Because I observed the Rama Ekadasi, I was given this splendid city to rule over. But for all of its grandeur, it is only temporary. I beg you to do something to correct this deficiency. You see, this is only an ephemeral city, a place of this material world. How may I make its beauties and glories permanent? Kindly reveal this to me by your instructions.

“The brahmin then asked,
‘Why is this kingdom unstable and how will it become stable? Please fully explain this to me, and I shall try to help you.’

“Shobhana then answered,
‘Because I fasted on the Rama Ekadasi without any faith, this kingdom is impermanent.
Now hear how it can become permanent. Please return to Chandrabhaga, the beautiful daughter of king Muchukunda, and tell her what you have seen and understood about this place and about me. Surely, if you, a pure hearted brahmin, tell her this, my city will soon become permanent.’

“Thus the brahmin returned to his city and related the entire episode to Chandrabhaga, who was both surprised and overjoyed to hear this news of her husband.

She said,
‘O brahmana, is this a dream you have seen, or is it actually a factual thing?’

“Somasharma the brahmin replied,
‘O Princess, I have seen your late husband face to face in that wonderful kingdom, which resembles a realm of the denizens’ of heavens playgrounds. But your former husband has asked me to relate to you that he says that his kingdom is unstable and could vanish into thin air at any moment. Therefore he hope you can find a way to make it permanent.’

“Chandrabhaagaa then said,
‘O sage among the brahmins, please take me to that place where my husband resides at once, for I greatly desire to see him again! Surely I shall make his kingdom permanent with the merit that I have acquired by fasting on every Ekadasi throughout my life. Please reunite us at once, again. It is said that one who reunites separated persons also obtains very great merit.’

“The humble brahmin Somasharma then led Chandrabhaga to Shobhana’s effulgent kingdom. Before reaching it, however, they stopped at the foot of Mt. Mandaracala, at the sacred ashrama of Vamadeva. Upon hearing their story, Vamadeva chanted hymns from the Vedas and sprinkled holy water from his samanya arghya upon Chandrabhaga. By the influence of that great Rishi’s rites, the merit she had accrued by fasting for so many Ekadasis made her body transcendental. Ecstatic, her eyes beaming in wonder, Chandrabhaga continued on her journey.

“When Shobhana saw his wife approaching him high on Mount Mandarachala, he was overwhelmed with joy and called out to her in great happiness and jubilation.

After she arrived , he seated her on his left side and she said to him,
‘O dearest Patiguru, please listen as I tell you something that will benefit you greatly. Since I was eight years old I have fasted regularly and with full faith on every Ekadasi. If I transfer to you all the merit I have accumulated, your kingdom will surely become permanent, and its prosperity will grow and grow until the coming of the great inundation!’ “

Lord Sri Krishna then continued to address Yudhisthira as follows,
“O Yudhisthira, in this way Chandrabhaga who was beautifully decorated with the finest ornaments and had an exquisitely transcendental body, at last enjoyed peace and happiness with her husband. By the potency of Rama Ekadasi, Shobhana found his kingdom on the peaks of Mt. Mandarachala able to fulfill all his desires and bestow upon him everlasting happiness, like that achieved from the transcendental Kama-dhenu milk cow.

“O greatest of kings, I have thus narrated to you the glories of Ramaa Ekadasi that falls in the dark fortnight of the month of Karttika.

“Anyone who observes sacred Ekadasi during both the light and the dark fortnight of each month is undoubtedly freed from the reactions to the sin of killing a brahmin. One should not differentiate between the Ekadasis of the light and dark parts of the month. As we have seen, both can award pleasure in this world and liberate even the most sinful and fallen souls. Just as black cows and white cows give equally good quality milk. So the Ekadasis of the dark fortnight (Krishna paksha) and the light fortnight (shukla or Gaura paksha) award the same high degree of merit and eventually liberate one from the repeated cycle of birth and death. Anyone who simply hears this narration of the glories of the sacred day of Rama Ekadasi, is freed from all kinds of sin and attains the supreme abode of Lord Vishnu.”

Thus ends the narration for the glories of the sacred Kartika-krsna Ekadasi, or Rama Ekadasi, from the Brahma-Vaivarta Purana of Srila Krishna Dvaipayana Veda Vyasa.

These stories have been summarised and slightly changed or abbreviated from how they are found in the celebrated book, “Ekadasi: The Day of Lord Hari” 1986. HH Krishna Balaram Swami. Bhaktivedanta Institute Press.