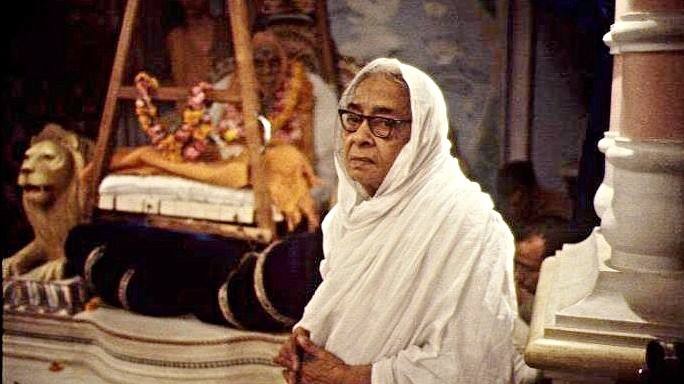 Srila Prabhupada stayed in Vrindavan for six weeks. During this time, he was very ill. In many temples around the world, 24-hour kirtan was being held. His sister, Pishima was also staying at the temple in Vrindavan much of the time. She was concerned and wanted to see her brother as often as she could.

One of my duties was to minimize this as much as possible. It was not an easy or enjoyable service. It was no coincidence that Pishima’s powerful determination was similar to Srila Prabhupada’s. She never listened to me. In fact, she would become quite upset and angry with me. She had a way of slipping into his room when no one noticed.

After one of her visits, Srila Prabhupada called me into his room.

One afternoon I walked into the servant’s quarters, which was also my bedroom, and she was sleeping in my bed. I was amazed. I hurried into Srila Prabhupada’s room, where he was sitting at his desk. I offered my obeisances and had a look of anxiety on my face.

“Prabhupada,” I said. “Your sister is sleeping in my bed. I don’t know what to do.”

“She cannot,” Srila Prabhupada said. “You tell her! She must be told that she can’t be doing these things. It is not good. They’ll talk.”

Srila Prabhupada was referring to the local sannyasis, caste goswamis, and godbrothers who might criticize our beloved Gurudeva. Srila Prabhupada often said that everything must be first-class while in Vrindaban or we would not be taken seriously. As always, being the acarya, he set an example for us.

“It is not good that she is spending so much time like this,” he continued.

“Prabhupada, I can’t say anything to her,” I anxiously explained. “She won’t listen to me. She only listens to you.”

That day he spoke to her for quite a while. I don’t know what the conversation was about, but I do know that when I went to the servant’s quarters the following day, I cautiously peeked into the room and there she was, sleeping in my room, quite soundly. I gave up. I left the area and found a spot on the other side of Srila Prabhupada’s room. She knew her brother was transcendental and it didn’t matter to her what anyone else thought in regards to her being a woman. She was his sister. Her resolve to be near her pure devotee brother was much greater than my ability to prevent her from doing so. She did whatever she had to do to get Srila Prabhupada’s association. I later mentioned to him that she had been in my room again.

“She is my sister,” he compassionately said. “She wants to be around me.”At the end of 1977, Satsvarupa Maharaja told me that Srila Prabhupada had asked her forgiveness for his offenses.

“Sometimes you may have come to see me and my disciples have not let you in,” he told her.

I beg forgiveness from Bhavatarini for my many offenses that I committed while trying to do my service. I beg that in the future my love for Srila Prabhupada will develop to the degree displayed by his sister. By her determination, she was able to be Srila Prabhupada’s younger sister and assist him throughout their lives. I pray to have the same desire that Bhavatarini had to serve the lotus feet of Srila Prabhupada life after life.

I first meet Bhavatarini, Srila Prabhupada’s sister, during this visit to the Calcutta temple. From then on, she was always known as “Pishima” which, I think, means “sister.” She was an incredible sight. She was a few inches shorter and quite a bit heavier than Srila Prabhupada, but her face was undeniably like a female Srila Prabhupada. Whenever she came to the temple, she brought sweets and gave them to her older brother, Srila Prabhupada. She then distributed them to all of the devotees in the temple. She loved to associate with Srila Prabhupada and spent as much time as she could in his presence.

It was impossible for me to understand their conversations, since I didn’t understand Bengali, but sometimes His Divine Grace described some details. It was obvious she had great love for her brother, not just on a material platform, but was able to comprehend his topmost spiritual position as well. She cooked for him often. This was a source of great anxiety for his disciples because she always used mustard oil in her cooking, which Srila Prabhupada said, “. . . was difficult to digest.” Once, when she was approached about this method she responded, “He can digest nails, if he wants.”

“No, Srila Prabhupada,” I said. “I don’t know anyone. Are you referring to your sister?”

“No, Srila Prabhupada,” I said chuckling. “I don’t think it is possible to gain weight without eating.”

Now both of us were laughing.

“Yes!” Srila Prabhupada said. “I don’t think so either. I think your conclusion is correct. She has to be eating very much. She tells me she is not eating, but I know she is eating. She complains to me about her health, that she doesn’t feel well. I told her, ‘You are so fat. How can you be healthy?’ She said, ‘I don’t know how. I am hardly eating at all. I don’t know how I am so fat?’”

I continued massaging Srila Prabhupada understanding how comfortable he was in his hometown surrounded by his family. I was so grateful to be able to associate with Srila Prabhupada during such intimate moments. I could see his concern for his sister’s health as he sometimes said that disease came from anxiety, uncleanliness and overeating.

That evening Srila Prabhupada was giving darsana to his disciples. Pishima was also present in the room. She didn’t mind that she could not understand the conversation. She enjoyed being with him as much as possible because she unconditionally loved her brother. How elevated and fortunate she was to have a natural love and affection for Srila Prabhupada!

“Look at her sitting there,” Srila Prabhupada said smiling. “Look at her … how fat she is.”

Everyone began laughing, including Srila Prabhupada and Pishima. He continued poking fun at her in a rascal-like, boyish way.

“She is so fat,” Srila Prabhupada said. “Look at her, how fat she is. She says that she doesn’t eat, but still she gets fat.”

The room was filled with laughter. Pishima enjoyed seeing everyone laugh and didn’t realize that her older brother was making fun of her. Srila Prabhupada enjoyed his joke and relished his disciples being a part of it. It was a rare and wonderful moment for everyone.

Srila Prabhupada, seeing you in that happy, carefree lila was pure nectar. I pray that in a distant lifetime I can bring a smile to your face as you laugh at me in my foolish predicaments. Presently, in my fallen condition, the only emotion you can feel for me is compassionate concern or annoyance due to my bumbling inability to properly or attentively follow your instructions.