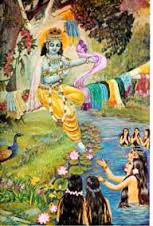 Something about the Vaisnava Calendar, by Srila Prabhupada

This calendar begins with the month of Margasirsa, which is equivalent to late November and early December.
The Vaisnavas call this month Kesava.

December–January is called Narayana,
January–February Madhava,
February–March Govinda,
March–April Visnu,
April–May Sri Madhusudana, and
May–June Trivikrama.
June–July is called Vamana,
July–August Sridhara,
August–September Hrsikesa,
September–October Padmanabha, and
October–November Damodara. This Damodara is different from the Damodara in Vraja. The name Damodara was given to Krsna when He was bound with ropes by His mother, but the Damodara form who is the predominating Deity of the month of October–November is a different manifestation.