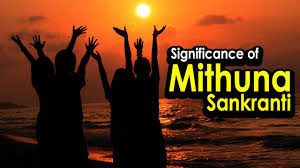 Today is Mithuna Sankranti, which means that the Sun entered into the celestial area of Mithuna (Gemini). According to the calendar I have, it happened at 8:05 of caribbean time.
Mithuna is the third zodiac of the ecliptic since the beginning of the year.

In western astrology Mithuna is Gemini and is represented by the twins Castor and Pollux, known as the Dioscuri.

In Vedic astrology Mithuna is represented by a couple, a man and a woman. It will take about a month for the Sun to enter into the next zodiac house.
Explaining everything about Mithuna Sankranti is the task of a vedic astrologer.
In sastras the word mithuna is related to material sexual intercourse between a man and a woman. But the same word is also used for spiritual love. Cin-mithuna refers to Radha and Krishna coming together.

The word Sankranti indicates the position of the Sun respect to the various zones, or areas (zodiac), of the ecliptic.
One area is roughly 8 degree of the ecliptic.
Every year the Sun travels through 12 such areas which are called zodiac, from the greek zodiakos, animals (zoon).
This is because the ancient astronomers and astrologers have called the constellations with names of animals. They are:
Aries, Taurus, Gemini, Cancer, Leo, Virgo, Libra, Scorpio, Sagittarius, Capricorn, Aquarius and Pisces.

For instance the Sun enter into Makara (capricorn) on January 14, and that period is called Makara Sankranti.

This is the list and the dates of beginning of the Sankrantis in the year 2019: