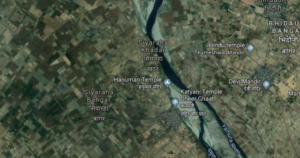 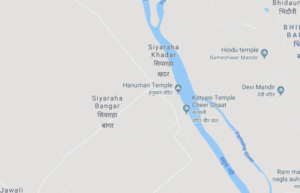 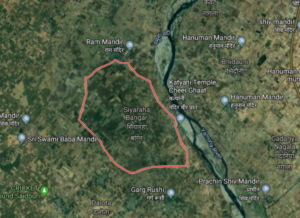 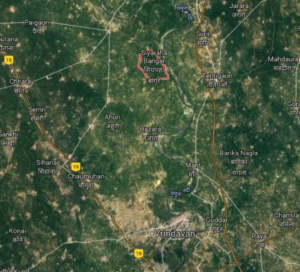 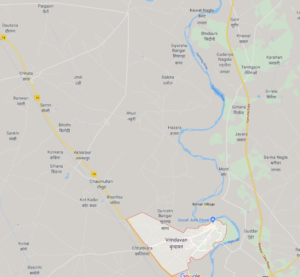 This is the celebrated ghata where Krishna stole the clothing of the gopis. The word ‘chira’ means ‘clothing’.

After following the Katyayani vrata for one month by undergoing austerities at Tapovana, the gopis came here on the final day of the vrata to make a clay image of Katyayani Devi and perform puja by offering incense, flowers, and ghee lamps to the goddess, who is worshiped in her form as eight-armed Durga riding a tiger. Before starting the Katyayani-puja, the gopis went to take their ceremonial bath in the Yamuna and kept their clothing on the river bank. Meanwhile, understanding the minds of the gopis to obtain Him as their husband, Krishna arrived there and after gathering all the gopi’s clothes, climbed into a nearby kadamba tree. Krishna then called the gopis to come and collect their clothing, one at a time, saying He wanted to enjoy the beauty of each slender wasted gopi as she collected her clothing. The gopis were the most beautiful women in the whole universe, far exceeding the beauty of heavenly Apsaras, or even the Lakshmis of Vaikuntha.

At first the gopis strongly protested Krishna’s actions, but inwardly they felt very satisfied that Krishna wanted to see them naked and admire their exquisite beauty. In Vedic culture, a young woman should only exhibit her naked beauty before her husband and no one else, therefore, Krishna was assuming the position of each gopi’s husband, by seeing them stand before Him in their naked splendor. The gopis realized they had no option but to come out of the Yamuna one at a time. Slowly, each naked gopi emerged from the river to collect her clothing from Krishna’s hand, allowing Him to see the incredible beauty of their delicately formed limbs, thus fulfilling the gopi’s desire to have Krishna as their husband. After enjoying their beauty, Krishna gave a promise to the gopis that in the near future, during the autumn season, they would be able to enjoy Him as their husband, by engaging with Him in conjugal pastimes in the forest of Vrindavana.

There is a temple here dedicated to goddess Katyayani Devi that commemorates the transcendental pastime that took place here. It is said that this tirtha was re-discovered by Srila Narayana Bhatta and Srila Jiva Goswami has confirmed that this is the original Chira Ghata mentioned in the Bhagavatam, and the actual spot where the gopis worshiped goddess Katyayani and where Krishna stole their clothing.

Just near to Keshi Ghata in Vrindavana there is another Chira Ghata, which is more properly called as Chayana Ghata, where Krishna rested (chayana) after killing the Keshi demon.
There was also a pastime of hiding the gopis clothing at Chayana Ghata (Chira Ghata), when Krishna temporarily hid the gopis clothing while they bathed in the Yamuna after performing rasa-lila at Seva Kunja. On that occasion the gopis were not naked but were wearing undergarments.