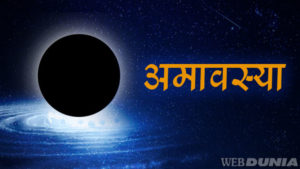 Amavasya is the new Moon night, or a night without the Moon visible in the sky. From tomorrow the Moon “will grow” up to Purnima, the full Moon. Then it will decrease again up to Amavasya again.

The word Amavasya means “the Moon is not there”. A= no, ma= Moon, asya= there.

The reason why we have waxing and waning Moon is told in the Maha-bharata, Salya Parva, chapter 35. I’ll tell the story some other time.

The forthnight starting with Amavasya is referred to as Shukla paksha (bright half of the month).

We Vedantist Vaisnavas follow the lunar calendar, while in the West the solar calendar is observed.

According to Sastra, Amavasya is a favorable day to offer Sraddha rituals to ancestors and other ceremonies for material gain. It is considered auspicios because Divali (Diwali) falls during a dark night.
It is also a favorable time for materialistic people to perform Kalasarpa Dosha Puja and demoniac sacrifices to appease Goddess Kali.