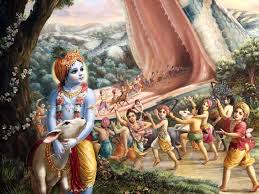 This asura was one of the followers of Kamsa.

According to the instructions of Karnsa, Agha once set out to Gokula to kill Sri Krsna.
At that time Sri Krsna was playing on the banks is of the river Kalindi with other cowherds.
Aghasura watched the games of the children from the sky above.
Then he transformed himself into a colossal serpent and lay with his mouth wide open; his open mouth looked like an immense cave.

The foul smell coming from his mouth soon spread over the whole place.

Sri Krsna and the other children did not know anything about this.
In the course of their games they walked into the cave-like mouth of Agha and were soon trapped in his belly. Agha then closed his mouth and all the boys including Sri Krsna were now imprisoned inside his body.
Realizing the situation Sri Krsna now enlarged his body. His body grew larger and larger until at last it burst open the body of the serpent (Agha).

Sri Krsna then restored the dead boys to life by his divine looks (Kataksa).

This Aghasura was the brother of Bakasura and Putana.