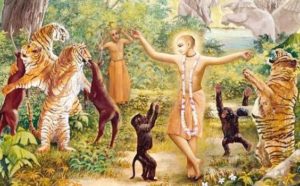 From a private email

A scholar studying buddhism seriously will certainly be disappointed visiting most of their centers in the world, because the vast majority of the so-called buddhist know nothing or surprisingly little about Buddha and Buddhism. I remember giving a class in a Buddhist center and they didn’t even know that their Buddha was born in Sakya Desa (today’s Nepal) and that he became realized in Gaya, in India. I went on talking about the four main Buddhist schools and the philosophical differences between them and they were looking at me like I was speaking in Sanskrit.

This is unfortunately so also for christians, most of whom never read the Bible nor the books of the main christian theologists. Not only the vast majority know nothing about their own religion but also do not care to know more. “I am christian because… my heart tells me to be christian.”

It risks to be the same for our Vaisnava movement. Luckily we have many institutions for studying and understanding what Krishna Consciousnes is, but in some countries I see that the level is too low. Devotee care to know just the bare necessity.

Religious or philosophical groups should care more about studying.